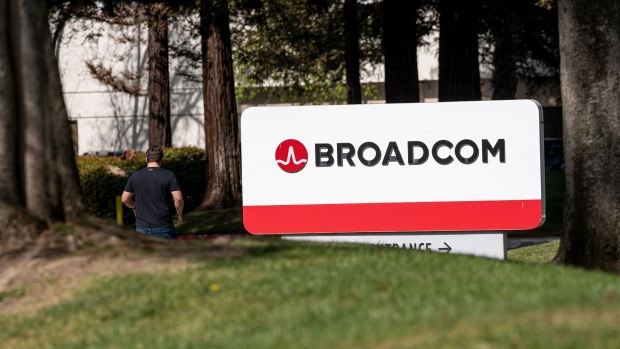 (Bloomberg) -- Broadcom Inc. is in talks to buy cloud-computing company VMware Inc., according to people familiar with the matter.

Talks are ongoing and there is no guarantee they will lead to a deal, said the people, who asked not to be identified because the matter isn’t public.

Chipmaker Broadcom has been searching for a big software acquisition to move the needle for some time. Chief Executive Officer Hock Tan has in recent years embarked on a string of acquisitions to build a company that’s one the largest and most diverse in the chip industry, including the 2019 purchase of Symantec Corp.’s enterprise security business and its acquisition of CA Technologies the year before.

Michael Dell and private equity firm Silver Lake are top investors in VMware, according to data compiled by Bloomberg. VMware was founded in 1998 and acquired by EMC Corp. in 2004, which sold part of its stake in an initial public offering three years later. It passed to Dell when it acquired EMC in 2016, and then formally separated from Dell last year.

VMware pioneered so-called virtualization software that lets customers consolidate applications and workloads on to a smaller number of server computers by using each server to handle more than one program. But as more tasks moved to the cloud, VMware struggled to keep up growth and carve out a key role for itself. The company eventually forged a close partnership with Amazon.com Inc.

(Adds details on the companies throughout.)