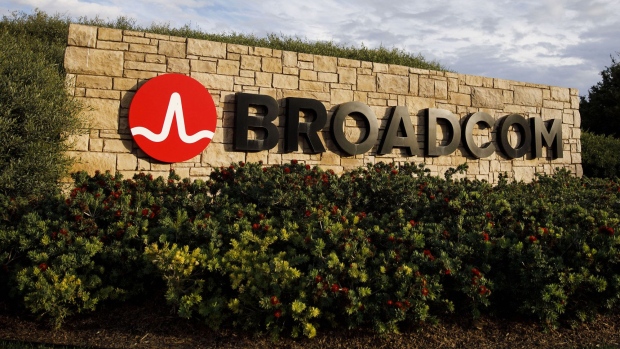 Signage is displayed outside of Broadcom Ltd. headquarters in Irvine, California, U.S., on Monday, Nov. 6, 2017. Broadcom Ltd. and its advisers are gearing up for a proxy battle, making an appeal directly to shareholders, should Qualcomm Inc. reject its $105 billion takeover offer, according to a person with knowledge of the matter. Photographer: Patrick T. Fallon/Bloomberg , Photographer: Patrick T. Fallon/Bloomberg

“The fundamental semiconductor backdrop has been improving, and we did not see any material impact on our businesses due to COVID-19 in our first quarter,” Chief Executive Officer Hock Tan said in a statement. “However, visibility in our global markets is lacking and demand uncertainty is intensifying. As a result, we believe it prudent to withdraw our annual guidance until visibility returns to pre COVID-19 levels.”

Sales in the current period will be US$5.7 billion, plus or minus US$150 million, the company said late Thursday. That missed Wall Street expectations. Tan said during a conference call with analysts that the quarterly target is largely in line with normal seasonal trends.

While Broadcom’s supply chain is unscathed by the virus so far, the CEO said it’s impossible to assess yet how much consumer demand for electronics will decline.

Broadcom’s stock dropped 10% in extended trading. The shares closed at US$218.78 earlier in New York, leaving them down 30% so far this year.

Broadcom is one of the largest technology companies so far to describe how its business is performing in the midst of the coronavirus health scare. Rising infections shut factories in China for weeks, disrupting trade and global supply chains, while curbing demand for hardware and software.

The San Jose, California-based company makes chips for iPhones. Earlier this year, Apple scrapped its revenue guidance for the March quarter because of slowdowns in production and declining demand for its products after stores were closed in China.

The fallout from Covid-19 comes as Broadcom, and other chipmakers, were already suffering from a trade dispute between China and the U.S. The company has been a major supplier to Huawei Technologies Co., but the Trump administration has forbidden U.S. companies from selling to the Chinese company. About a third of Broadcom’s products go into devices that are either bought in China or exported from China around the world.

CEO Tan has built Broadcom into one of the biggest semiconductor makers through a string of deals. With customers including Apple and Samsung Electronics Co., Broadcom results are closely watched by investors.

The company decided to keep investing in its wireless unit, ending speculation about a potential spinoff or sale. In January, Broadcom reported new long-term supply agreements with Apple. Tan said he changed his mind because of the certainty provided by a new customer commitment, not because of how the wireless unit was valued by possible acquirors.

Sales in the fiscal first quarter of 2020, which ended Feb 2., rose 1 to US$5.86 billion, the San Jose, California-based company said. Before certain items, profit was US$5.25 a share. That compares with average analyst estimates for per-share profit of US$5.34 on sales of US$6 billion, according to data compiled by Bloomberg.