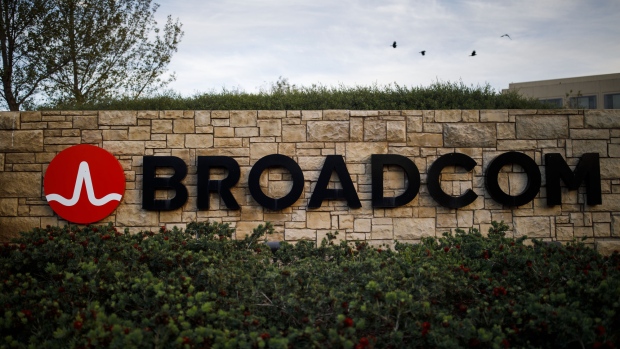 Birds fly above signage displayed outside of Broadcom Ltd. headquarters in Irvine, California, U.S., on Monday, Nov. 6, 2017. Broadcom Ltd. and its advisers are gearing up for a proxy battle, making an appeal directly to shareholders, should Qualcomm Inc. reject its $105 billion takeover offer, according to a person with knowledge of the matter. , Bloomberg

(Bloomberg) -- Broadcom Inc., one of the biggest makers of smartphone chips, reported modest quarterly sales growth but reiterated a bearish annual forecast it gave three months ago, indicating the trade war between China and the U.S. is still suppressing demand for semiconductors.

Sales in the period ended Aug. 4 rose 9% to $5.52 billion, the San Jose, California-based company said Thursday in a statement. Before certain items, profit was $5.16 a share. That compares with average analyst estimates for per-share profit of $5.13 on sales of $5.52 billion, according to data compiled by Bloomberg.

Broadcom said it still expects revenue in fiscal 2019 to be $22.5 billion, a lowered projection it made in June. The company no longer gives quarterly predictions and instead updates its annual target at the end of each quarter. Shares declined about 1.7% in extended trading.

Chief Executive Officer Hock Tan has built a $100 billion company through a spate of acquisitions, including his purchase of part of Symantec Corp. for $10.7 billion in August. While Broadcom has one of the broadest reaches in the technology industry, that diversity hasn’t made it immune to the ongoing trade dispute between the U.S. and China and blacklisting of Huawei Technologies Co., which is hammering Tan’s semiconductor business.

“We believe demand has bottomed out but will continue to remain at these levels due to the current uncertain environment,” Tan said in the statement.

About half of the chips Broadcom sells are either used in China or sent through factories there on the way to becoming part of electronic devices sold around the world. Last year, Huawei accounted for about $900 million of Broadcom’s sales, Tan has said.

The chipmaker’s position as a major manufacturer of components for Apple Inc. and Samsung Electronics Co. means its orders are seen as a gauge of confidence in future demand from some of the world’s largest smartphone makers. It’s also one of the leading suppliers of networking components used by large data-center operators such as Alphabet Inc.’s Google and Amazon.com Inc.’s cloud division.

Three months ago, Tan pared back his revenue forecast for the year, indicating that revenue in each of the remaining quarters would be a billion dollars lighter than previously expected. That has held back Broadcom’s stock, which is up 18% this year, compared with a 39% advance by the Philadelphia Stock Exchange Semiconductor Index.

To contact the editors responsible for this story: Jillian Ward at jward56@bloomberg.net, Molly Schuetz