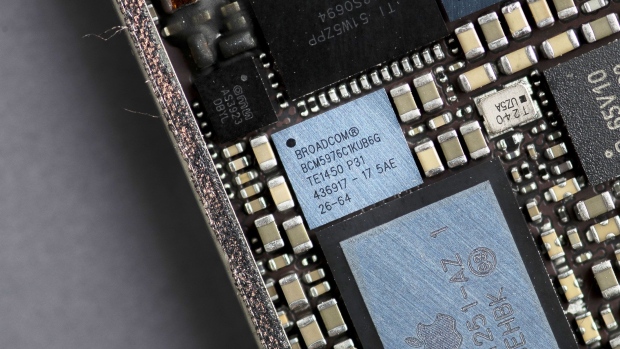 (Bloomberg) -- Broadcom Inc., a major Apple Inc. supplier, suggested the latest iPhones will be launched later than usual this year.

Tan often refers to Apple this way. This time, the executive said the delay will mean the bump in wireless revenue experienced by Broadcom will happen one quarter later than usual this year.

“We are in,” Hock said, referring Broadcom components in the iPhone. “The question is timing.”

“This year, we do not expect to see this uptick in revenue until our fourth fiscal quarter,” the CEO added. “So accordingly, we expect, our wireless revenue in Q3 will be down sequentially.”

Apple is planning to release its next iPhone line multiple weeks later than usual, Bloomberg News previously reported. The company typically unveils its new iPhones in the second half of September, but has occasionally, like in the case of the iPhone X in 2017, launched major new models later in the year.

The delay to the new iPhone release this year is due to the Covid-19 pandemic, which has slowed Apple engineer travel to China to finalize the devices and required employees to mostly work from home in the early months of 2020.

Broadcom’s Tan also warned about “supply constraints and an expected substantial reset in wireless” when the company’s results came out on Thursday. With much of the world’s population confined to their homes, handset demand has dropped.