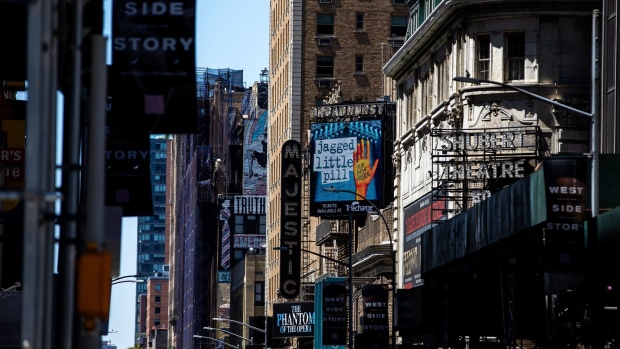 All Broadway theaters were shut down to curb the spread of the coronavirus in March 2020. , Photographer: Demetrius Freeman/Bloomberg

(Bloomberg) -- Jeremy Lane worked on Broadway as a stagehand. During the pandemic, his stage became the back of an ambulance.

Of millions of New Yorkers whose lives have been upended by Covid-19, few are more central to the city’s culture than the workers who arrange scenery and props and run sound and lighting for a theater industry that the Broadway League says brings $15 billion to the city’s economy.

Now, with producers pinning their hopes on a September reopening for Broadway, Carnegie Hall, Lincoln Center and other venues, they must staff shows with a dispersed talent pool.

Lane, 29, worked on “Sing Street” and “Dear Evan Hansen,” but was thrown out of work when Broadway went dark a year ago. He trained as an emergency medical technician, then did shift work for a private ambulance company. Recently he got hired as crew for a television crime drama. He says the rescue work “was just to do something,” and he intends to return to the theater.

Covid-19 has hammered the 3,000 or so behind-the-scenes workers who invisibly make New York a world capital of culture. While small theaters and corporate trade shows across the nation employ stagehands, their importance to the city’s economy and culture is unique. If that work force can’t be reassembled, New York’s show won’t go on.

During theater season, stagehands work long hours, and if everything goes according to plan, the thousands of audience members will have no idea they exist. Many of ther jobs no longer do: Employment in arts, entertainment and recreation fell 66% in 2020 from a year before, the largest decline among the city’s economic sectors, erasing a decade of gains in what was one of New York’s most vibrant industries, according to a February report from the state Comptroller’s Office.

Many stagehands are represented by the Theatrical Stage Employees union and can earn more than $100,000 a year, salaries that promise a reasonable standard of living in a painfully expensive city. For a year, many have been adrift.

“I’d like to think we’d all be back together when we start up again, but that may be naive,” she said. “Some people have families and may want something more stable. Some may be committed in new jobs, others may have left the city and can’t find an affordable way back.”

Munchrath was working at the Brooks Atkinson Theater preparing for the March 12, 2020, opening of “Six,” a musical about the wives of King Henry VIII. That’s the night the shutdown began, and the show never opened. “When you’re working on a show it’s all-consuming, so we’d all been too busy to realize how bad it had become,” Munchrath said.

Her life savings depleted, she left New York to move in with a friend rent-free in Houston. Meanwhile, Munchrath, who once found herself soothing a nervous Carole King backstage, is taking psychology and counseling courses from the University of California at Berkeley online.

A sense of community and long hours of total commitment are part of the lifestyle for stagehands, who take the word “crew” seriously. Although support networks have sprung up thanks to Zoom, the months of idleness and separation have been difficult.

“We used to joke how we would kill for a day off, you know?” said stagehand Steve Zakszewski, sipping coffee on a Brooklyn sidewalk with friends who mainly work in clubs and event spaces around town.

“Here’s 365 of them,” rejoined Darien Mytryshyn, who has a son on the way and had planned to move this year to suburban Long Island -- a goal now pushed to 2023.

Paul Morrill, a self-employed producer who directs stagehands for live events, said millions of entertainment workers across the U.S. are professionally stranded.

“Every one of them had the faucet turned off in one night,” he said. “From the busiest and the biggest artists, including Taylor Swift, all the way down to the person who does Taylor Swift’s laundry on tour in the wardrobe department.”

Morrill said he’s lost about a year’s income so far, with no work in sight.

“I’ve definitely had a few friends who’ve really been struggling with the isolation, because you’re kind of on your own,” he said. The ones trying to tough out the pandemic until their jobs come back are the ones suffering the most financially and mentally, he said.

“It’s amazing how much it means to people, to the folks in the cultural community to finally get back to work and do what they love and do what means so much to all of us,” de Blasio said during a Monday news briefing. For the audience, he said, it was “important to them to be coming back, feeling live performance again as part of the real identity in New York City.”

The city will set up a pop-up vaccination site dedicated to theater workers five blocks north of Times Square that will be able to deliver 1,500 shots a day. Theaters can’t open until the virus is under control, Tracey said.

“Our goal is to cram as many people into as small a space as possible,” Tracey said. “You can’t do that responsibly. That’s wrong.”

Even with healthy crews, reilluminating the Great White Way will take time.

“Every show is going to need a lot of lead time,” Munchrath said. “We have to start over, check the equipment and the building. I’d go over every inch of cable lines to see if any rats had a little nibble on them.”

Backstage life will be vastly different, said Lori Rubinstein, executive director of the Behind the Scenes Foundation, a nonprofit that assists tech workers in the entertainment industry. Health considerations will transform a freewheeling environment into a highly regulated occupation featuring rigorously assigned work zones and mandatory distancing, she said.