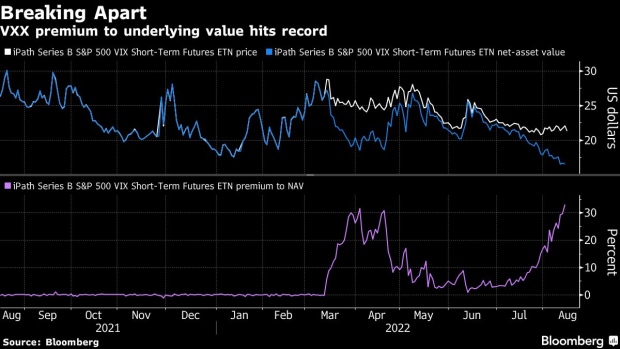 Barclays was forced to suspend issuance of the product after it sold $15 billion more in structured notes and ETNs than it had permission for.

The bank has since resumed issuance of more than two dozen of the impacted products, yet VXX -- which allows traders to wager on gyrations in stock prices -- is the largest of six still left in limbo. That’s taken away a key arbitrage mechanism used to keep the ETN’s price in line with its underlying assets, while the product hasn’t posted an outflow since early April, Bloomberg data show.

The lack of selling is further inflating the premium as the Cboe Volatility Index continues to grind lower as stocks rebound from lows notched in June, fueled by wagers on a less-hawkish Federal Reserve.

“It appears that VXX holders are believers,” said Steve Sosnick, chief strategist at Interactive Brokers. “They’re not selling as VIX drops, and there is no other mechanism that would cause a drop to NAV.”

VXX share issuance was initially halted in late March, one of the first of more than 30 such halts after exceeding the amount of structured notes and ETNs it was permitted to. The bank later revealed it had booked a charge of 523 million pounds ($631 million) in the first quarter primarily related to the blunder.

A spokesperson for Barclays declined to comment on the timing of when VXX share issuance would restart beyond the bank’s press release.

Normally, specialized traders would work with the issuer to create more ETN shares, boosting the outstanding supply and depressing the product’s price. But with the number of shares in circulation effectively capped, the dislocation has only ballooned as the VIX trades below 20.

“It’s a bad combo of a broken product and its reason for existence -- volatility -- disappearing,” said Todd Sohn, an ETF strategist at Strategas Securities. “If it was open to share creations, it would just get arbitraged out like normal.”

Unlike exchange-traded funds, ETNs are debt obligations backed by a bank. Typically, major banks will file for blanket registrations that allow them to regularly issue notes, with Barclays going well beyond its issuance limit.

VXX is just the latest ETN involved in a high-profile skirmish. The products earned a black eye in 2018, with the VelocityShares Daily Inverse VIX Short-Term ETN (ticker XIV) at the heart of the so-called Volmaggedon episode. The ETN ecosystem then underwent a shockwave in June 2020, when Credit Suisse Group AG made the surprise decision to delist almost $3 billion worth of notes.

“ETNs continue to let investors down in new and bewildering ways,” said Nate Geraci, president of The ETF Store, an advisory firm. “It’s why I expect the ETN space to continue shrinking.”