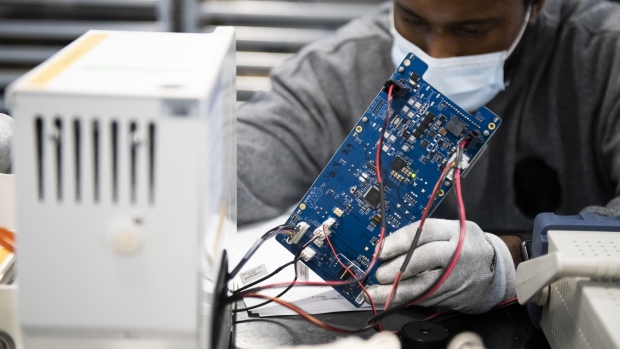 (Bloomberg) -- A group of state officials has an idea to expand the availability of ventilators and other equipment hospitals need to treat coronavirus patients: let more medical facilities fix the ones they have.

In a letter to equipment manufacturers, the state treasurers of Pennsylvania, Colorado, Delaware, Illinois, and Rhode Island said hospitals sometimes had to wait longer than a week for technicians under their maintenance contracts to fix equipment. Manufacturers have refused to supply parts to anyone who hasn’t undergone the expensive company training.

“In a global pandemic with this kind of urgency and this kind of devastation, where every second counts, there shouldn’t be a single ventilator in any hospital that can’t be used because of these restrictions,” Pennsylvania State Treasurer Joe Torsella said in an interview.

Torsella led the group calling on manufacturers to release all repair manuals and service keys and to allow hospitals to use technicians of their choice instead of those required under maintenance contracts. The effort also turned a spotlight on an issue that some consumer rights groups are hoping could lead to a more permanent change.

Twenty states are considering legislation that would give consumers more rights to repair, resell and modify products they buy, whether it’s more access to the software on John Deere farm tractors, going outside Apple Inc.’s “Genius Bar” to fix a broken iPhone, or selling digital books after they’ve been read. Some, but not all, also include provisions that would cover medical equipment, which are tightly regulated by the U.S. Food and Drug Administration.

The pandemic may give the movement a boost because of the outcry over reports of broken or unavailable ventilators. In April, the U.S. Public Interest Research Group sent a petition with 43,000 signatures calling on manufacturers to release repair information.

Hundreds of biomedical engineers, also known as biomeds, signed a letter to be released Monday by PIRG that calls for greater access to service materials and for making product-specific training “on fair and reasonable terms.”

As the outbreak spread over the past month, some medical equipment makers such as Medtronic Plc and General Electric Co. agreed to turn over manuals and other information to ensure hospitals have what they need.

The companies, along with Draegerwerk AG, sell medical equipment for as much as $1 million or more for each machine. Draegerwerk, which biomeds said has particularly strict rules, is projecting an increase in sales as hospitals need more devices to treat coronavirus patients. Even more profitable are the required service contracts to keep complicated equipment like ventilators, patient monitors, and MRI machines working.

“We provide 24/7 technical support to the hospitals we supply as well as rapid on-site service,” said Marion Varec, a spokeswoman for Draegerwerk. “In fact, we provide manuals, to the extent consistent with FDA quality standards. We listen to our customers and support their needs.”

Legislative proposals have been strongly fought by the industries affected, and the medical device industry has been among the most vocal. It’s trying to get Congress to pass legislation that would impose more stringent requirements on hospital and independent biomedical technicians, or biomeds. Instead, the U.S. Food and Drug Administration was told to investigate whether there was a difference in the quality of service -- the agency determined in 2018 that there was no fall off in quality of repairs when it was done by in-house hospital technicians or trained independent biomeds.

Among those weighing in on behalf of the biomeds was the Defense Department, which called the profit margins on maintenance “astounding” and said the markup for parts could be more than 1000%.

Leticia Reynolds, president of the Colorado Association of Biomedical Equipment Technicians and a member of the U.S. Army Reserve, said there’s a big difference in what you can do at military hospitals and at civilian ones.

“In the military, you can work on pretty much anything,” said Reynolds. In the civilian sector, “If you haven’t been to their school, they say ‘We won’t help you,’ or ‘You can’t buy parts.”’

The industry said its employees are held to a higher standard than those working for hospitals or with third-party repair firms, known collectively as independent servicing organizations, and its efforts were to put all technicians on the same level.

“Currently, only servicing activities performed by medical device manufacturers are held to any quality, safety, or regulatory requirements by the FDA,” said Peter Weems, Director of Policy & Strategy at the Medical Imaging and Technology Alliance. Independent servicing organizations are not required to register with the FDA, report deaths or serious injuries, or adopt quality management systems.

Some hospital officials are critical of the medical equipment industry.

“It’s not about safety, it’s about maintaining a business advantage,” said Patrick Flaherty, vice president of supplier performance at Pittsburgh-based UPMC, a group of more than 40 hospitals, who called the manufacturers “monopolists and cartels.” “It’s absolutely repulsive if you try to cloak it under patient safety.”

Others say that the additional protections are needed with regard to complicated medical equipment -- especially as more systems become networked and vulnerable to hacking.

“This is life-saving and life-sustaining equipment,” said Nick Lewis, systems director of environmental safety management and compliance at Baptist Memorial Health Care in Memphis, Tennessee. “Having tight controls -- whether that be passwords, or when they update software -- they have to be pretty tight with that stuff or we could potentially put ourselves at risk with cyber issues.”

Amid a dire shortage of personal protective gear for doctors, nurses and other first responders through the country when the Covid-19 virus migrated from Asia and Europe, U.S. hospitals also found ventilators in short supply and some delivered from the National Stockpile broken. Hospitals and critical care facilities had to adapt other equipment, such as reconfiguring anesthesia machines and transport ventilators.

Massachusetts General Hospital sent a team to inspect and repair the entire contingent of ventilators the state received from the National Stockpile, knowing smaller hospitals wouldn’t have the trained technicians, said Paul Biddinger, director of emergency preparedness at the Boston hospital.

“Early on, as we saw the coronavirus emerging as a threat, we tried very hard to anticipate what the impact on our system could be,” Biddinger said.

At the Johnson Memorial Health in Johnson, Indiana, the hospital found powered air-purifying respirators needed by health-care professionals in the Covid unit that were so old there was no way to buy the connector hoses that pump fresh air, said marketing director Jeff Dutton.

“Someone knew a small business in Franklin that had a 3D printer and was able to replicate the part perfectly,” Dutton said.

Manufacturers initially kept to their long-standing policies when it came to access to manuals, software codes and parts. But as the scope of the crisis grew, many began easing restrictions, posting their closely kept service manuals on their websites, or dropping objections to having them posted on sites such as iFixit.com, which crowd sources manuals.

It’s unknown whether they will try to pull them back once the pandemic is over. Jared Wilson, co-founder of Insight HTM LLC, which does repairs and maintenance at ambulatory surgical centers, said he is bizarrely “grateful” for the pandemic.

“Typically we’re in what was the morgue, the bottommost corner of the hospital,” Wilson said. “This really has brought to light the issue of maintenance of equipment. We’ve been striving for this for so long.”

Flaherty said the work being done at hospitals and critical care centers around the world spotlight that some of the rules are unnecessary.

“If Covid did not create a learning platform for people, then it’s a missed opportunity,” Flaherty said.