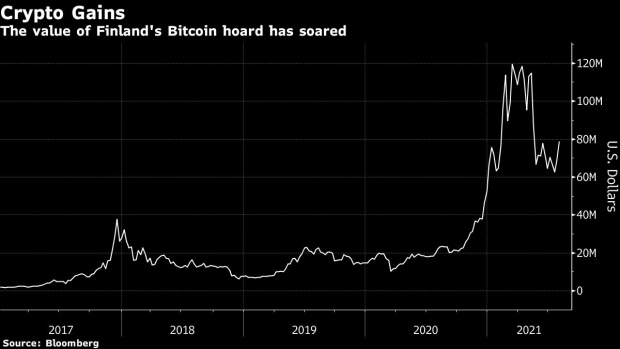 Finland is looking for a broker to sell a Bitcoin stash worth more than $78 million that was seized in drug busts.

The Nordic nation’s customs authority, which is sitting on 1,981 Bitcoins forfeited to the state by court order, launched a tender on Thursday for brokers to turn them into hard currency.

It wants to create a permanent mechanism to “safely and reliably” sell any cryptocurrencies that land in state coffers in the future, according to Pekka Pylkkanen, the authority’s director of financial management.

While the U.S. government was the first to sell confiscated Bitcoins at an auction in 2014, other countries have also increasingly sold cryptocurrencies seized in criminal investigations as prices of the assets are soaring.

Finnish Customs expects to sign a framework agreement with as many as three brokers, valued at an estimated 250,000 euros ($297,000) over two years. That could reach as much as 2 million euros “as there may be more cryptocurrency seizures and as the value of the assets tends to change quickly,” according to the statement.

Authorities have taken their time deciding what to do with the virtual currency, the bulk of which was accumulated in raids before 2018. That year, the Treasury set out guidelines for handling the assets, saying authorities aren’t allowed to store the coins on virtual currency exchanges, but must keep them off the Internet.

“The main aim of Finnish Customs is to make sure the cryptocurrencies are sold in a secure way, preventing further money laundering and criminal activities,” the authority said in a statement.

The assets could also not be used as a means of payment or invested, and any sales should primarily take place via public auctions rather than commercial exchanges, which the Treasury described as untrustworthy and opaque.