Brookfield Infrastructure Partners LP urged regulators to nullify a $350 million (US$289 million) termination fee attached to Pembina Pipeline Corp.’s takeover of Inter Pipeline Ltd. that would kick in if Brookfield manages to kill the deal.

The breakup fee “threatens to enrich Pembina” at the expense of Inter’s shareholders, Brookfield said in a statement Thursday, announcing a legal challenge filed with the Alberta Securities Commission. Brookfield said if it’s successful in getting rid of or reducing the termination fee, it will boost its competing takeover bid for Inter by an equivalent amount.

“This break fee was agreed in the face of a clearly superior proposal submitted by Brookfield Infrastructure to IPL’s special committee,” Brookfield said. 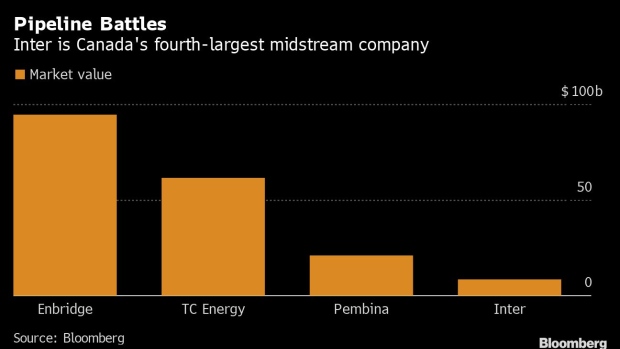 In February, the affiliate of private equity giant Brookfield Asset Management Inc. made a $7.1 billion offer for Inter that was rejected by the board. Brookfield sweetened its bid one day after Pembina’s deal to buy Inter was announced on June 1. Inter’s board prefers Pembina’s all-share deal, which is currently worth about $8.5 billion, while Brookfield’s hostile bid is 74 per cent cash.

Inter defended the termination fee as a “customary deal protection feature,” according to an emailed statement.

“In the face of a superior offer with greater upside for Inter Pipeline investors, Brookfield’s actions are desperate and wasteful,” Pembina said in a statement.

CIBC Capital Markets said that, while there’s “no bright-line test as to the appropriateness of a break fee,” termination fees of 4.5 per cent to 5 per cent of equity have raised concerns in the past, noting the one in the agreement with Pembina is 4.2 per cent.