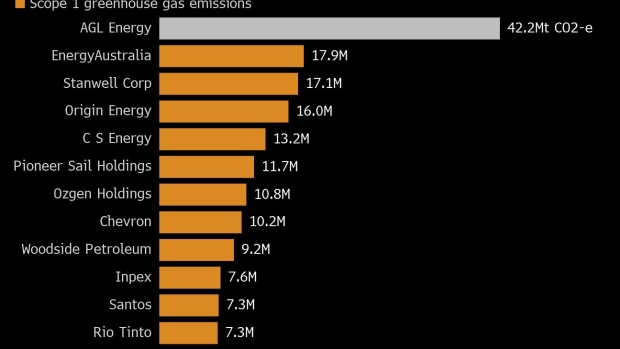 Emissions billow from cooling towers at the AGL Energy Ltd. Loy Yang Power Station in the Latrobe Valley, Australia, on Saturday, Feb. 23, 2019. Australian Prime Minister Scott Morrison is pledging A$2 billion ($1.4 billion) over the next 10 years in direct action to lower greenhouse gas emissions, making a climate pitch to voters ahead of elections due by May. , Bloomberg

The consortium made a second offer of A$8.25 ($6.08) a share -- an 11% premium to Friday’s close of A$7.43, and higher than the A$7.50 tabled last month, Cannon-Brookes said Sunday in a Tweet. He indicated that another proposal probably won’t be forthcoming.

The consortium of Brookfield and Cannon-Brookes’ Grok Ventures “is putting our pens down - with great sadness,” he said. Cannon-Brookes, a co-founder of software developer Atlassian Corp., is Australia’s fourth-richest person.

Brookfield and AGL declined to comment. Details of the new approach were first reported by the Sydney Morning Herald.

Sydney-based AGL rejected the new offer as too low and the company plans to comment publicly on its reasons on Monday, according to people familiar with the decision, who requested anonymity to discuss private details. The consortium’s earlier, lower offer had valued AGL’s equity at A$5 billion.

AGL, formed in 1837, is responsible for the largest share of Australia’s scope-one greenhouse gas emissions, and has faced criticism over its plans to continue operating giant coal plants into the 2040s. The company is seeking to separate its power generation assets and electricity retailing business via a demerger.

Brookfield insisted it could generate more value by abandoning AGL’s existing strategy, and pledged to deliver a A$20 billion transition plan to close down the coal plants more quickly and replace them with renewable energy.

The plan would have enabled the company to hit net-zero emissions by 2035 -- 12 years earlier than its current proposals, the bidders said.