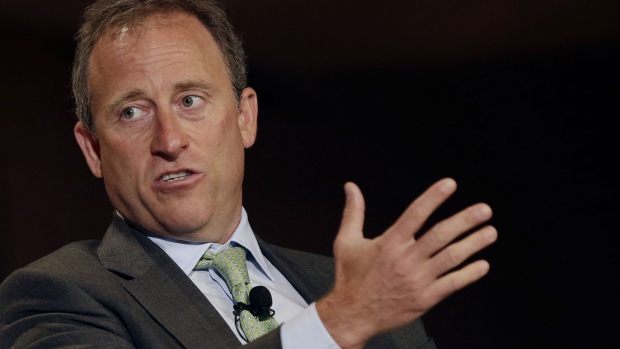 (Bloomberg) -- Brookfield Asset Management Inc. cranked up the pressure in its dispute with American Equity Investment Life Holding Co., calling for the firm to publicly release details about its partnership with Josh Harris’s 26North Partners.

Brookfield also demanded to know whether American Equity considered a sale before releasing its own financial targets earlier this year, and wants an answer to the question at an investor symposium scheduled for Wednesday.

The Toronto-based asset manager is American Equity’s largest shareholder with an 18.5% stake, but the two sides are locked in a dispute over the latter’s decision to invest in a new firm started by Harris, who co-founded Apollo Global Management Inc. Last month, Brookfield Chief Investment Officer Sachin Shah resigned from AEL’s board, citing a disagreement over strategy.

“As your largest shareholder, we have a number of questions about the strategic direction of the company,” Brookfield’s reinsurance arm said in a letter to AEL’s board Tuesday. Topping the list is how much American Equity paid for its 26North stake and what percentage it owns.

Brookfield also called on AEL to disclose what methodology was used to evaluate the investment, what governance rights are included, whether it has any right or obligation to increase its equity stake, and whether it also owns equity in other asset managers it has partnerships with, such as Adams Street Partners.

The letter also asks the board whether it considered a sale or other alternatives that could produce “a significantly higher return for all shareholders.”

Read more: A Deal With Harris Divides Brookfield and the Firm It Saved

Shah left AEL’s board over concerns that an unproven firm like 26North was too risky for the insurer’s investors and policyholders, who prefer steady risk-adjusted returns, people familiar with the matter told Bloomberg at the time.

The dispute with AEL marked a rare instance of turmoil on public display for Brookfield, a sprawling asset manager that prides itself on avoiding drama. The rift has also weighed on AEL’s shares, which fell 21% on the day Shah’s resignation was disclosed. Brookfield said at the time that it may sell some of its stake, though Tuesday’s filing indicates it hasn’t done so yet.

American Equity shares have since recovered somewhat, buoyed by a share-buyback program and dividend increase. The stock was down 0.7% to $40.02 at 10:42 a.m. in New York; that’s about 5% lower than the closing price on the day before Shah’s departure.

Brookfield arrived as a white knight for American Equity just over two years ago amid an attempted hostile takeover by Massachusetts Mutual Life Insurance Co. and Apollo’s Athene insurance arm.

Brookfield agreed to acquire a stake in AEL that would make it the insurer’s largest shareholder and thwart the buyout attempt. A five-year deal between the two companies also called for Brookfield to reinsure as much as $10 billion in existing and future annuity liabilities.

American Equity’s AEL 2.0 strategy prioritized increasing the yield on new investments from 3.5% to more than 4% to keep the business profitable in a low-rate environment, according to an October 2020 presentation. The initiative called for the creation of a diversified portfolio through partnerships and joint ventures with asset managers.