Inter Pipeline Ltd.’s plans to sell itself to Pembina Pipeline Corp. have been dealt a blow after a prominent shareholder advisory firm recommended investors reject the deal and instead support a $8.6 billion (US$6.7 billion) hostile offer from Brookfield Infrastructure Partners.

“Absent an improvement of terms from PPL, shareholders appear to be better off with the riskless option from BIP’s deal,” ISS said in the report issued Saturday, referring to Pembina and Brookfield by their stock tickers.

The comments are likely to boost Brookfield’s chances of prevailing in its battle for control of Canada’s fourth-largest pipeline company and breaking up Pembina’s plan to create an operator of energy infrastructure across Western Canada’s sprawling oil sands and natural gas industry. The ISS report came a day after Pembina said it doesn’t intend to increase or change its offer. 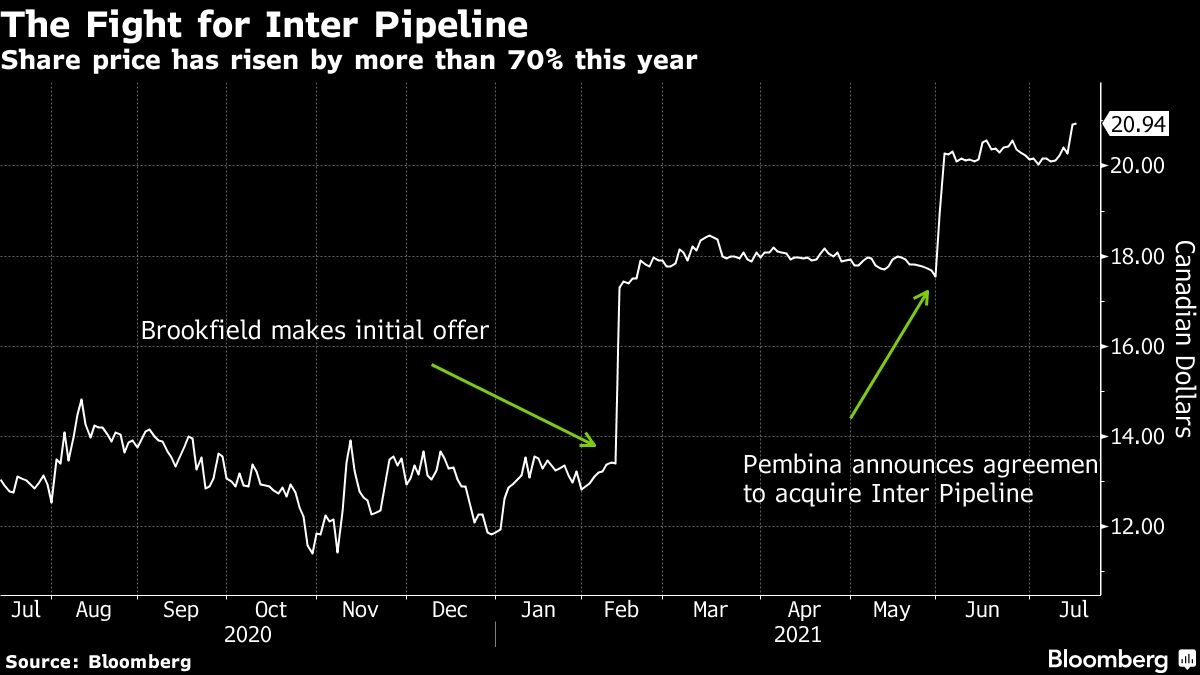 Inter Pipeline dropped 3.3 per cent to $20.25 at 10:47 a.m. in Toronto, amid a broad sell-off in oil and energy equities, and about 30 cents above the value of the Pembina offer. Brookfield Infrastructure Partners dropped 2.5 per cent and Pembina was 0.7 per cent higher.

The fight for Inter Pipeline has lasted several months. The company’s board spurned an unsolicited approach from Brookfield in February. Inter Pipeline agreed to be acquired by Pembina in June in an all-stock deal. That transaction is currently valued at about $8.3 billion.

Brookfield has raised its offer for Inter Pipeline several times in an effort to win support for its takeover bid. On Monday, it said it has filed its latest offer, in which Inter Pipeline shareholders can opt to receive $20 in cash or 0.25 of a share in Brookfield Infrastructure Corp. for each Inter share.

Representatives for Inter Pipeline and Pembina didn’t respond to requests for comment following the ISS report. Brookfield said Monday it agrees with the ISS recommendation and urged shareholders to vote against the Pembina offer.

“Pembina believes that its strategic combination with Inter Pipeline is extremely compelling from an immediate and long-term value perspective and believes shareholders should vote in favor of the transaction,” Pembina said in a statement Friday.

Brookfield has extended its tender offer for Inter Pipeline to Aug. 6., a little more than a week after a planned shareholder vote on the Pembina deal on July 29.