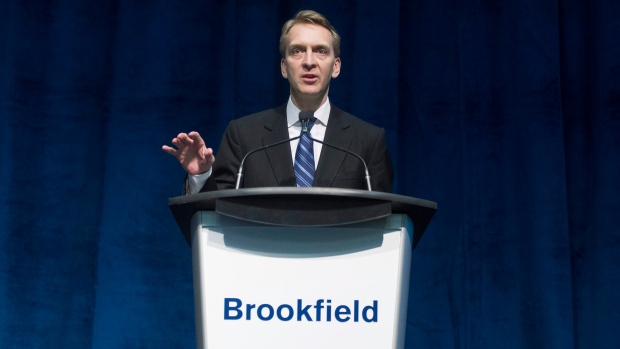 "We look at all infrastructure,” chief executive officer Bruce Flatt said in an interview at the company’s annual general meeting in Toronto Friday. “If there’s something that makes sense for us, given everything that has gone on, we’ll consider it.”

The federal government announced last month it would buy Kinder Morgan Canada Ltd.’s Trans Mountain pipeline system and its planned expansion project for $4.5 billion. The move ended weeks of speculation sparked by Kinder Morgan’s vow to abandon a project citing “unquantifiable risk” after the British Columbia government vowed to use every tool to block it.

Ottawa’s financial advisers, New York-based Greenhill & Co., have already begun marketing the pipeline project to potential buyers, including several pipeline companies, pension funds and asset managers, according to people familiar with the matter. The most likely outcome of a sales process at this point would be a Canadian-led consortium buying the system from the federal government, said the people who asked not to be identified because the matter is private.

Brookfield, which has US$285 billion in assets under management, is a leading infrastructure investor around the globe. Last year, the company led a consortium that acquired 90 per cent of a natural gas distribution network owned by Petroleo Brasileiro SA for US$5.2 billion through its publicly-traded subsidiary, Brookfield Infrastructure Partners.

Flatt also said he was hopeful that shareholders in U.S. mall owner GGP Inc. would support Brookfield’s proposal to acquire the shares it doesn’t already own in the company for about US$15 billion. The matter will go before an upcoming shareholder vote at GGP.

“The board of the company recommended the transaction because they thought it was the right thing for the company and we think the shareholders will conclude the same thing when they vote," Flatt said.

Brookfield’s plan for GGP would best be undertaken as a private company because it would involve redeveloping the land around its current malls for other purposes, Flatt said. If it were to make those changes at GGP as a public company, the share price could suffer in the near term because the funds from operations would likely fall, he said.

“It’s not a short-term game,” he said. “What we are going to do is redevelop significant amounts of its real estate."

In 15 years, significant value would be created, he said. Brookfield has done something similar at Rouse Properties since it took the company private in 2016. The asset manager has since repurposed much of the land that Rouse’s malls were located on for residential, commercial and office space by bringing it into the broader Brookfield business.