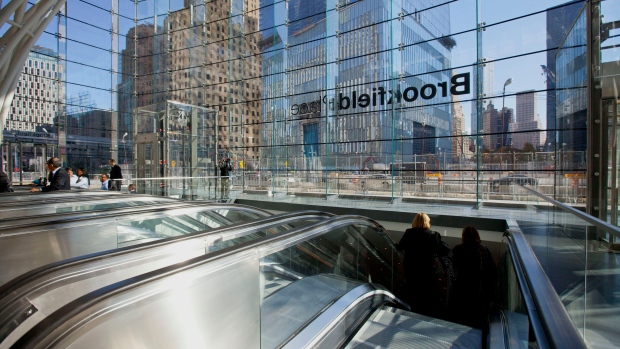 Pedestrians ride the escalator in the West Concourse at the World Trade Center site in New York, U.S., on Thursday, Oct. 24, 2013. , Jin Lee/Bloomberg

TORONTO -- Real Estate giant Brookfield Property Partners LP saw its earnings jump 80 per cent in the fourth quarter despite pressure on its retail side from a rise in tenant bankruptcies.

Overall net income for the company, which reports in U.S. dollars, came in at $1.55 billion or a dollar per unit for the quarter ending Dec. 31, up from $858 million or 51 cents per unit last year.

The firm said Wednesday that the increase was due mostly to higher valuation gains in its Canada and United Kingdom office portfolios, as well as performance in several of its investments.

The retail division's net income dropped to $261 million, compared with $426 million for the same quarter last year, as the company felt the effects of store closures in about 297,000 square metres of its retail space over the past two years.

The retail sector has been under competitive pressure from a variety of factors, including online sales, leading to a wave of recent bankruptcy filings including Payless ShoeSource, Forever 21, Gymboree, Nine West Holdings Inc., and Claire's.

Some, like Forever 21, are still restructuring with the potential to stay in operation, though the fashion retailer said it would close all Canadian operations.

Just on Tuesday, Macy's said it would close about 125 underperforming stores over the next three years. Brookfield said 14 of the locations were in its properties, but that the decision to close the locations didn't come as a surprise.

Brookfield said that despite the headwinds, it has managed to lease out 75 per cent of the space vacated by bankruptcies, and at higher rates, and that overall has a better outlook on bankruptcies for the year ahead.

"It's always difficult to say in January how the year is going to pan out, but it feels as though the holiday season was pretty good this year, and so our expectation is that 2019 probably, sort of, was peak for that, and we're anticipating that 2020 may get a little better," said Kingston.

The office sector performed better as net income for unit holders came in at $600 million, up from $256 million in the same quarter last year. The company said it had leased 702,000 square metres of office space last year, at rents 32 per cent higher than expiring leases.

Looking ahead, the company is working through several major developments. In December, the company announced it would build the largest mass timber office building in North America as part of its 11.3 hectare Pier 70 waterfront development in San Francisco. The firm says the 27,900-square-metre, six-floor building is part of its commitment to reducing the environmental impact of its buildings.