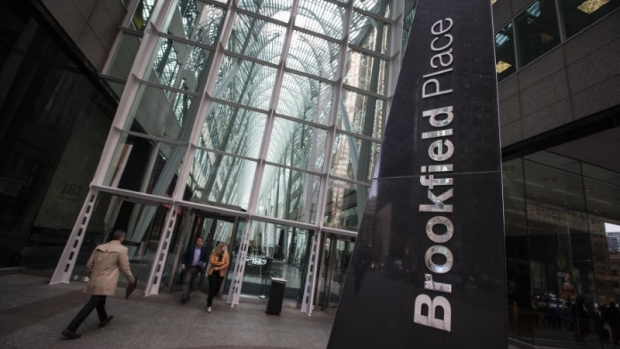 Brookfield Asset Management Inc. has deployed more than US$950 million in public companies since the sell-off began in an effort to gain a toehold for bigger deals down the road.

The asset manager’s infrastructure arm, Brookfield Infrastructure Partners LP, said Friday it has invested US$450 million in a handful of publicly listed infrastructure firms since the market swoon caused private market deals to dry up.

This week its private equity unit, Brookfield Business Partners LP, said it had invested about US$500 million in public companies with the goal of potentially taking some of them private.

Its real estate arm, Brookfield Property Partners, said it too had shifted its focus to the public markets, with US$8 billion in dry power sitting on its books and dearth of large deals to be had.

“We began investing in the capital markets aggressively in March but have pulled back somewhat in April as the markets quickly recovered,” Sam Pollock, Brookfield Infrastructure’s Chief Executive Officer, said in a letter. “We would describe our current investment posture as optimistically patient.”

Brookfield Infrastructure said on a conference call Friday it is focused on 10 to 15 names, primarily in North America and Europe. It didn’t disclose its targets. While it managed to invest in some of them during the sell-off, the list of attractive companies has narrowed as the market recovered, the firm said.

While Brookfield’s infrastructure assets have been affected by the outbreak of Covid-19 and the subsequent social distancing measures, it remains well-positioned to take advantage of opportunities that arise, Pollock said. Brookfield Infrastructure has roughly US$4.3 billion in liquidity after a bond issuance in April and a US$1 billion increase to its revolving credit facility.

Brookfield tends to be a counter-cyclical investor, searching for investments in countries and sectors that are out of favor. Pollock said the current situation reminded him of the financial crisis, when turmoil in markets led Brookfield to a major deal with Australia’s Babcock & Brown Infrastructure about a year after the Lehman Brothers bankruptcy.

Roughly 70 per cent of Brookfield Infrastructure’s funds from operations is from its utilities, energy and data infrastructure segments, which are expected to see little impact from Covid-19, he said. Other parts of its business, including railways, ports, and toll roads, are more exposed to a downturn.

April volumes in its rail segment fell 7 per cent below planned levels. It saw declines of about 15 per cent in container volumes in the first quarter, with volumes from Asia down because of the lockdowns.

Those numbers rebounded quickly as China reopened its economy but are still 10 per cent below expected volumes. Its toll roads business has also seen a 40 per cent decline in volumes due the coronavirus.

“Our outlook for the balance of the year is guided by the current state of affairs and the cautious approach most governments are taking towards opening up their economies,” Pollock said, adding that he expects non-essential businesses to largely remain closed through the second quarter.

Pollock said he expected the recovery to be more a ‘swoosh’ shape than ‘U’ or a ‘V’ with the aid of government stimulus. He said he expects most sectors and businesses to return to a more normal environment by the end of 2020 or first half of 2021, assuming there is not significant second wave of the virus.