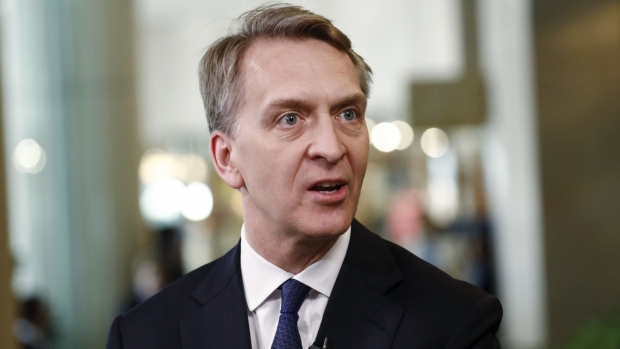 (Bloomberg) -- Brookfield Asset Management Inc. said it raised a record $23 billion during the second quarter and expects to accelerate the pace of investments after the disruption caused by Covid-19.

The Toronto-based alternative asset manager said it has $77 billion in cash, securities and other available capital, including uncalled capital commitments from clients. That figure includes $12 billion raised in its latest distressed debt fund by its Oaktree Capital Management unit. When that fund is closed, it should be the largest ever raised for distressed debt investing, Brookfield Chief Executive Officer Bruce Flatt said in a letter to shareholders.

“While we do not expect full recovery of the global economy until well into 2021, we believe the worst is over, and our own businesses are slowly recovering,” said Flatt. “We have been keeping our powder dry, waiting for opportunities we believe will come.”

Flatt said that while the quarter was busy for raising capital, its three flagship funds are now 50% committed and that the firm expects to start raising money again for their next vintages in 2021.

“We are being patient with our capital, but we expect the pace of investment to increase over the next 12 months as opportunities present themselves,” Flatt said.

The market disruption hurt Brookfield’s earnings during the quarter, with some businesses recording no income, Flatt said. The company took writedowns of $978 million, largely in its real estate portfolio, that contributed to a second quarter loss of $656 million, or 43 cents per share.

Its funds from operations were $1.16 billion during the quarter, up nearly 5% from the same period last year.

“The good news is that those operating businesses that were impacted are now all recovering, and the balance of the year should be better,” Flatt said.

Flatt said he does not believe the Covid-19 outbreak will permanently impact urbanization trends, despite what some are predicting. He said video conferencing and internet connections have allowed people to work from home during the crisis but, ultimately, it won’t work over the longer term because people are social beings.

“The same arguments about distanced working were made when the automobile became ubiquitous, the telephone allowed transcontinental conversations, and the internet enabled online communication. None of these has changed the fact that people favor being in cities and in offices,” Flatt said.

“In fact, quite the opposite has always been true in past. These communication tools historically enhanced great cities and offices rather than supplanting them. We think this will play out the same way this time as well.”