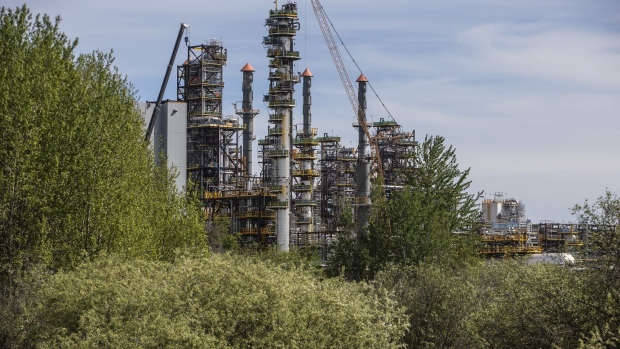 (Bloomberg) -- Brookfield Infrastructure Partners LP has won enough shareholder backing to push ahead with its C$8.6 billion ($6.8 billion) takeover of Inter Pipeline Ltd., according to people familiar with the matter.

The infrastructure arm of Brookfield Asset Management needed the support of 55% of Inter Pipeline investors. Preliminary figures show it has passed that threshold ahead of a deadline for shareholders to tender Friday afternoon, the people said, asking not to be identified because the information is private. Brookfield declined to comment.

If the preliminary figures hold, the vote would end a six-month battle for control of Canada’s fourth-largest pipeline company. The tussle over Inter Pipeline has been the biggest corporate fight in the Canadian resources industry since Newmont Mining Corp. thwarted a hostile bid by Barrick Gold Corp. in 2019 by agreeing to a joint venture around the two companies’ projects in Nevada.

The Inter Pipeline takeover saga started in February with an unsolicited C$7.1 billion offer from Brookfield. Inter Pipeline’s board rejected it and instead endorsed a friendly deal with Pembina Pipeline Corp. on June 1. But only two months later, Inter Pipeline walked away from the rival midstream company after Brookfield sweetened its offer multiple times and won the endorsement of prominent advisory firms Institutional Shareholder Services Inc. and Glass Lewis & Co.

The fight for Inter Pipeline was a contentious one at times, with all three companies taking grievances before the Alberta Securities Commission. It also follows years of failed attempts to build major projects like TC Energy Corp.’s Keystone XL and Energy East, which has likely made existing lines more valuable. Inter Pipeline owns conduits across Western Canada, connecting oil and natural gas producers with domestic and foreign customers, as well as storage assets in Europe.

Pembina, which refused to raise its own offer in response to Brookfield, sought control of its rival’s many complimentary midstream assets. The company will walk away with a C$350 million termination fee paid by Inter Pipeline.