Pembina's been an excellent steward of assets throughout history: Newhaven's Ryan Bushell

Brookfield Infrastructure Partners LP raised its hostile offer for Inter Pipeline Ltd. to $8.4 billion (US$6.9 billion) as it sought break up the company’s deal with Pembina Pipeline Corp., setting off a full-blown takeover battle for Canada’s fourth-largest pipeline company.

Brookfield Infrastructure said Wednesday it will make a cash-and-stock offer valued at $19.75 per share, representing a 4.4 per cent premium to Pembina’s all-stock proposal, and take it directly to Inter’s investors. The offer, which is nearly three-quarters cash, came a day after Pembina made an all-stock offer that’s currently worth about $19.25 a share.

Brookfield’s new bid for Inter represents the latest twist in a nearly four-month saga for control of the Canadian midstream company that owns pipeline infrastructure across Western Canada, connecting the region’s oil sands and natural gas producers with domestic and foreign customers. In February, Brookfield made a $7.1 billion offer to buy all of Inter’s outstanding shares, but was spurned by the board, which set up a team to review options. 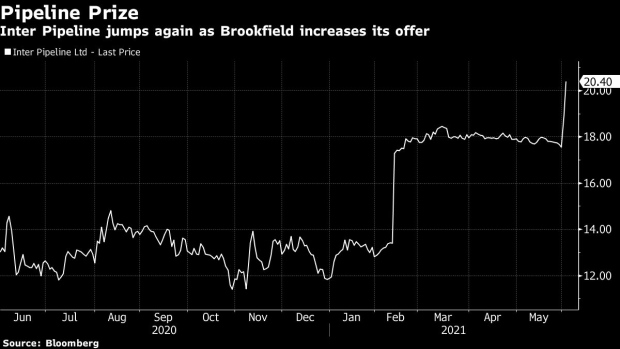 “Pembina must now weigh whether the industrial logic and asset synergies are sufficient to offset increased dilution from a raised counteroffer, or maintain the current offer and let shareholders choose between the two proposals,” analysts at Tudor Pickering Holt & Co. said in a note.

Brookfield said it was granted access to Inter’s data room last month, carried out due diligence and made several takeover proposals. It said it was “disappointed” by board’s decision to support Pembina’s “inferior” bid and is taking its revised offer directly to Inter Pipeline shareholders.

Inter Pipeline informed Brookfield on Monday afternoon that the company should “urgently submit its best offer” as the company was inclined to accept a rival offer, according to Brookfield’s release.

Brookfield said it responded the same day with its $19.50 per share offer, comprised of 74 per cent cash and 26 per cent shares, but was informed the company has already signed a competing deal.

“Pembina might raise its bid for Inter Pipeline, we believe, Bloomberg Intelligence analysts Michael Kay and Brandon Barnes said in a report. “Pembina would have more synergies, estimated at $200 million a year, with Inter Pipe than Brookfield and can likely make a more compelling case for operating the assets.”

The takeover fight is happening amid a wave of consolidation among Canadian oil and gas companies as they struggle to weather an industry beset by volatile commodity prices, a lack of export pipelines and regulatory uncertainty, highlighted by U.S. President Joe Biden’s cancellation of TC Energy Corp’s Keystone XL export pipeline project last January.

Whichever company ends up owning Inter Pipeline will inherit the Heartland Petrochemical Complex, which is under construction in Alberta. Inter had been looking for a partner to help fund the $4.2 billion construction cost while also trying to sign long-term sales contracts for 70 per cent of the plant’s capacity.

Brookfield and its institutional partners intend to amend their previous offer, which was made in February, no later than June 4. Brookfield said it has received all regulatory and antitrust approvals and can close as early as 10 business days from the filing date of the new offer.