Brookfield Asset Management Inc. said it reached a US$6.5 billion agreement to acquire the shares of Brookfield Property Partners LP it doesn’t already own, boosting its offer to take private its real estate arm.

The Canadian alternative-asset manager said Thursday it plans to acquire the minority stake for US$18.17 per unit. That would mark a 10 per cent increase to the US$16.50 a unit Brookfield Asset offered in January, and a 26 per cent premium over where the shares traded prior to that earlier proposal.

Brookfield Property Partners owns, operates and develops one of the largest portfolios of real estate in the world. At the end of December it had about US$88 billion in total assets, including developments such as London’s Canary Wharf and Brookfield Place in New York. In 2018, Brookfield Property acquired GGP Inc., the second-largest mall operator in the U.S., for about US$15 billion. 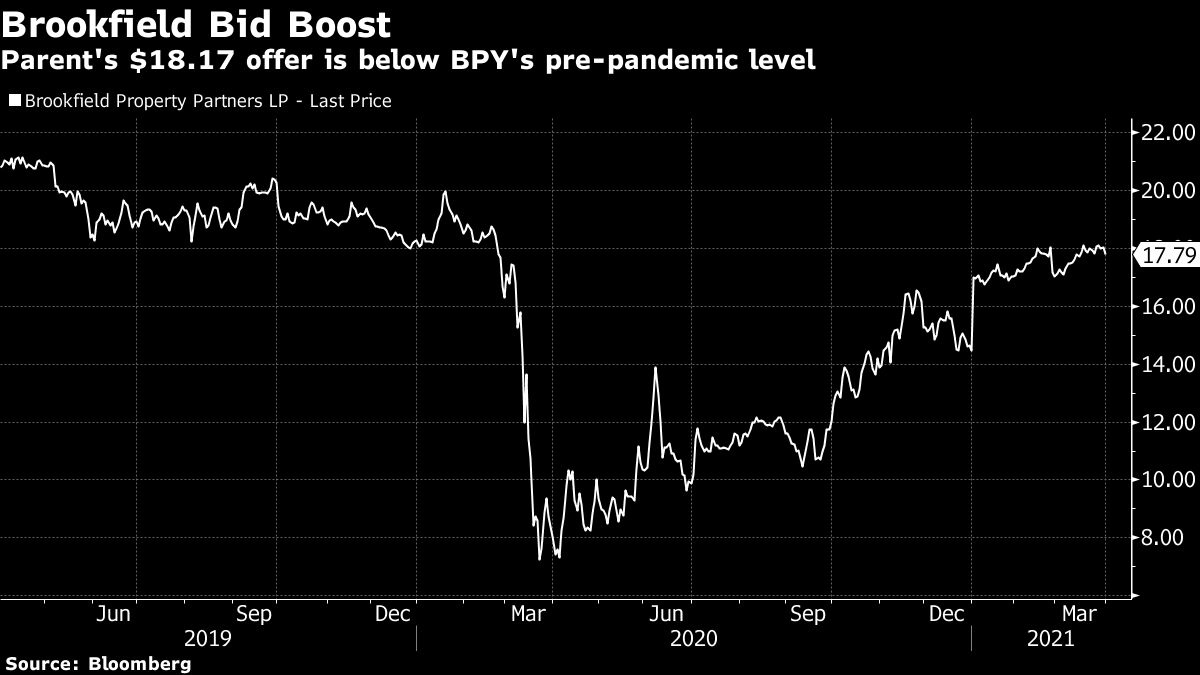 The pandemic has taken a toll on the company as widespread stay-at-home orders kept workers from offices and shoppers from malls. Brookfield Property Partners reported a US$2 billion loss and its shares fell 21 per cent last year.

“We are pleased to have reached agreement with BPY’s independent directors on a transaction we believe is appealing to BPY unitholders in many aspects and allows for greater optionality in how we manage our portfolio of high-quality real estate assets,” Nick Goodman, Brookfield Asset Management’s chief financial officer, said in a statement, using the stock symbol for the real estate arm.

Lazard Freres advised Brookfield Property’s special committee and gave a fair market value of US$14 to US$18.50 per unit, the companies said.

The deal terms are “ultimately attractive” for Brookfield Property unitholders, according to Dean Wilkinson, an analyst with Canadian Imperial Bank of Commerce. It’s near high end of the fair value assessment range, 10 per cent higher than the January proposal and is roughly a 10 per cent discount on the consensus value of the company’s assets, Wilkinson said in a note to clients.

In the five years leading up to the pandemic, Brookfield Property units have traded at a discount ranging between 20 per cent and 45 per cent of its consensus net asset value, he wrote, and raised his price target to US$18.17, in line with the offer price.

Brookfield already owns 60 per cent of Brookfield Property Partners, which had a market value of about US$17 billion as of Wednesday’s close. The deal is subject to a vote of public unitholders and other conditions, and is expected to close in the third quarter of 2021, the company said.

Goodman said in January that taking the real estate subsidiary private was appealing because it has consistently traded at a discount to the underlying value of its assets, even before the coronavirus pandemic. He said he believed that was because much of the company’s value was created through the development of projects like New York’s Manhattan West, which take years to generate returns for investors.

Brookfield Property Chief Executive Officer Brian Kingston said in a letter to shareholders in February that rent collection from office tenants remained at normal levels, although occupancy lagged in many markets since the pandemic began. Collections in its retail properties and foot traffic in its malls haven’t fully recovered, he added.