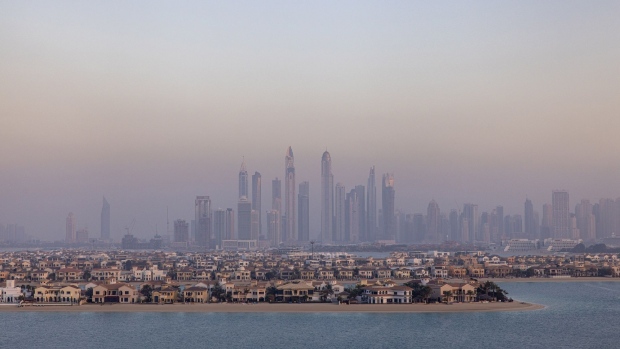 Residential villas on the waterside of the Palm Jumeirah backdropped by residential skyscrapers beyond in the Dubai Marina district of Dubai, United Arab Emirates, on Thursday, Feb. 24, 2022. A government committee set up before the pandemic enlisted some of Dubai’s largest developers as members to try to manage supply and demand in the property market and ensure that state-owned businesses don’t crowd out private builders. Photographer: Christopher Pike/Bloomberg , Bloomberg

Merex Investment Group, jointly owned by Canada’s Brookfield and Dubai Holdings, signed a seven-year lease with talabat for its new headquarters to service operations in nine countries across the region.

Prospects for commercial real estate are in flux as many employees still choose to work from home and take advantage of the flexibility afforded by policies instituted since the pandemic. Companies are responding by trying to lure them back with offers of a more attractive work space packed with amenities that allow for a more relaxed environment.

talabat is tripling the amount of office space and will move nearly 1,000 employees from its current offices, across eight floors in the Business Bay area of Dubai, to a building that used to be a department store. The move for Talabat will be in two stages starting in November and ending in the first quarter of next year.

“The office space was the place you had to go before” the pandemic, talabat’s CEO Tomaso Rodriguez said. Now “we have to market ourselves with our employees and the office has to become the place people want to go to.”

The new venue will include a whole floor fitted with a large pantry, pool tables and areas featuring seating for employees to meet, socialize and work together away from desks, he said.

Merex is getting similar requests from companies but they’re “not looking for a traditional office,” Shamsaee said. “They’re looking for a workplace that you can actually enjoy,” he said.

talabat’s new headquarters will be situated in a shopping district that’s had trouble with sluggish demand amid a glut in retail space across Dubai. Brookfield was brought in as a partner in Merex to help revitalize two developments that struggled to attract steady tenants despite occupying a central location and an area along the beach-front.

Merex is now reconfiguring its projects away from reliance on retail. It lured Canadian University Dubai, with around 2,000 students, to City Walk and is converting retail space into other uses such as gyms, wellness centers and even co-working areas. The goal is to push up footfall so it would support the shops and restaurants on daily basis.

The pandemic hammered many businesses and led to “tenant failure” but 2021 has seen improvements, followed by an even stronger performance in the first two months of this year, with Dubai seeing large numbers of tourists, Merex’s CEO said.

“We wanted to be a lot more than a pure retail play,” Shamsaee said. “We wanted to have that captive audience on a day-to-day basis.”

Merex manages 2 million square feet of space including 550 shops across three projects, including City Walk, The Beach in Jumeirah Beach Residence and La Mer. The joint venture was valued at 5 billion dirham ($1.4 billion) when it was formed in Dec. 2019 to own and operate the retail assets.

The partnership will look to acquire similar assets across the region “if the right opportunity comes by,” Merex’s CEO said.

But the priority over the next three years will be to boost occupancy rates and yield on the existing assets to significantly enhance their valuations, the CEO said. A possible share sale by Merex isn’t currently under consideration, Shamsaee said.