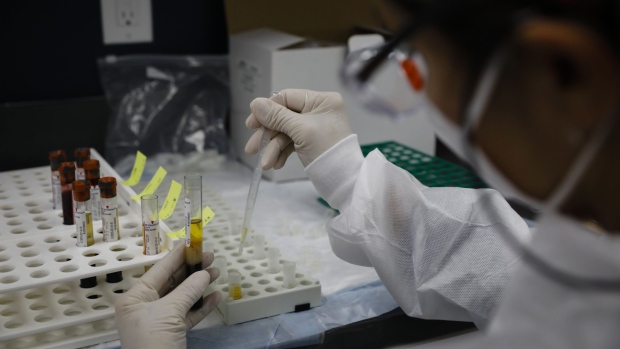 A health worker wearing a protective mask works in a lab during clinical trials for a Covid-19 vaccine at Research Centers of America in Hollywood, Florida, U.S., on Wednesday, Sept. 9, 2020. Drugmakers racing to produce Covid-19 vaccines pledged to avoid shortcuts on science as they face pressure to rush a shot to market. , Bloomberg

The stock rally sparked by Pfizer Inc.’s promising Covid-19 vaccine trial results boosted many investors’ fortunes, but none so dramatically as a pair of German brothers.

Andreas and Thomas Struengmann have collectively added about $8 billion to their wealth this year thanks to their stake in BioNTech SE, the German firm that’s developing the vaccine with Pfizer. BioNTech’s American depositary receipts surged this week after the U.S. drug giant reported the shot they’re working on prevented 90% of symptomatic infections in tens of thousands of volunteers.

At $22 billion, the twins have one of the world’s biggest health-care fortunes, according to the Bloomberg Billionaires Index. The brothers, 70, formed their empire by reinvesting the proceeds of their family’s generic drugs businesses.

The brothers set up their family office, Athos Service, soon after Novartis AG announced in 2005 it was buying their drugmaker, Hexal, along with their stake in affiliate EON Labs for a combined 5.7 billion euros ($6.7 billion).

Thomas Struengmann said in a December interview with German newspaper Handelsblatt that the brothers initially promised themselves they wouldn’t invest more than 1 billion euros in the biotech sector because of the risks and requisite patience. They ended up exceeding that cap after seeing glimpses of promise.

“You want to see your little plants continue to grow,” he said.

Their bet on BioNTech epitomizes their ambition of funding transformational drugs. They helped to give the firm 150 million euros in seed money in 2008 and now own about half of the company. Its stock rally has also boosted the fortune of BioNTech Chief Executive Officer Ugur Sahin to more than $4 billion, according to the Bloomberg index, putting him on the cusp of joining the world’s 500 richest people.

After taking over family-owned drug company Durachemie from their father Ernst in 1979, the brothers sold it seven years later and used the proceeds to set up Hexal. They started with about two-dozen employees in an apartment building near Munich and grew it into the world’s fourth-largest generic-drug company.

“Our strength is speed and flexibility,” Thomas, who has a doctorate in business management, said in a 2004 interview. “While the big elephants are making their decisions, we have already taken action.”

Since 2010, they’ve co-invested with EQT AB in a hearing-aid business from Siemens AG, sold German lender Suedwestbank AG for more than double what they paid for it in 2004 and snapped up stakes in numerous biotech firms including Immatics NV, which recently merged with Arya Sciences Acquisition Corp.

Not all their bets have paid off.

Immatics’s share price has fallen about a third since it began trading on the Nasdaq in July, while 4SC AG, a German cancer-drug firm in which the Struengmanns are majority shareholders, is down more than a fifth this year. BioNTech had a rocky start, pricing its IPO below its target range, though its shares have since surged 580%.

“For us, it’s not primarily about returns,” Thomas said in the Handelsblatt interview. It’s “above all about generating highly effective medical innovations.”