TSX will continue to outperform the S&P500 in the second half of this year: Greg Taylor

In retrospect, bulls should maybe have been more worried that one of the most reliable tools the Federal Reserve has for subduing inflation is to scare the US equity market. They’re getting the message now.

Its hands tied when it comes to unwinding supply snarls and tight labor markets, Jerome Powell’s central bank has made an unusually explicit target of asset prices, with one Fed bank president, Neel Kashkari, going as far as saying he was happy to see shares tank after Powell’s hawkish turn in Jackson Hole, Wyoming. The result has been a big dose of pain for investors, with the S&P 500 down five of six days in the meeting’s aftermath, ending the week lower by 3.3 per cent.

A lingering danger for stocks is that getting them to fall has its merits when it comes to relieving price pressures in the economy. Besides its chilling effect on consumers, a gutted equity market has usually been a prerequisite for subduing the worst bouts of inflation, a study by The Leuthold Group found. Disinflationary effects have historically kicked in when the S&P 500 drops more than 19 per cent, according to the investment firm. It breached that level in June and is now approaching it again.

If the central bank is to defeat inflation, “the equity market will be the catalyst, not the observer,” wrote Steven Blitz, chief US economist of TS Lombard. “With prices, employment and wages lining up to give spending a boost, the Fed is only left with driving down equities in order to reverse growth.” 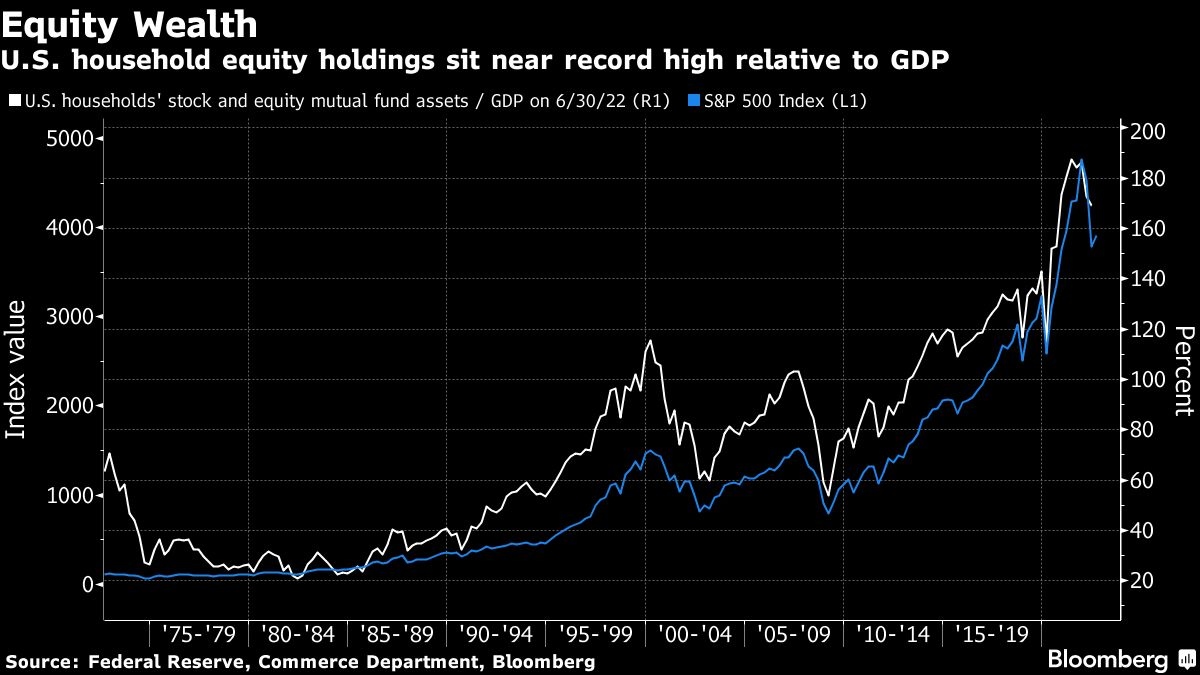 To be sure, interest-rate movements, money-supply growth and the trend of the dollar affect the inflation outlook too. It’s just that the stock market has been a very reliable marker for calling for the peak in cyclical inflation, according to Doug Ramsey, Leuthold’s chief investment officer.

Using a 19 per cent drawdown threshold, he found that in 10 of 15 cases since 1957, inflation was lower 12 months later. “When you hit the 19 per cent drawdown, they coincide with a lot of historical inflation peaks,” Ramsey said in a recent interview. “That’s a pretty strong disinflationary impulse.” 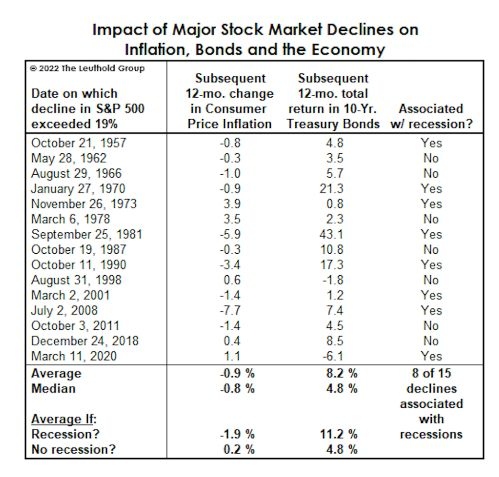 Fluctuations in share prices potentially affect or predict the direction of inflation through several channels, including what Ramsey and others call a “negative wealth effect.” With so much American money tied up in equities, and the market sitting at levels well above the dot-com peak despite this year’s rout, an equity slump may hurt consumer demand, helping put a lid on inflation.

Stocks rallied briefly Friday after hiring data gave the Fed an opening to back off from taking the most-aggressive stance on rates at its next meeting, but investors soured on the impact of a jobs report that showed a still-strong labor market. The S&P 500 fell 1.1 per cent to clinch a third straight weekly drop.

Plotting consumer expectations and the S&P 500’s change over three months, Blitz at TS Lombard found the two have tracked each other pretty closely in recent years. The wealth effect is important, he said, especially since a growing number of American households own equities through 401(k) accounts.

“The US is an equity culture, for better or for worse,” Blitz said. “There is a lot more work ahead for the Fed to create the ‘pain’ necessary to get inflation back to 2 per cent.”

About one-quarter of US household assets are invested in equities. And based on a 2020 study, every dollar lost in stocks leads to a 3 cent reduction in spending. Data like that support a view that reining in stocks is a legitimate goal for policy makers.

“The Fed really is trying to tighten financial conditions whether it’s through slowing down demand through interest rate increases and quantitative tightening, or through other factors such as what’s going on with the comfort of consumers and companies to spend,” Lisa Erickson, senior vice president and head of public markets group at US Bank Wealth Management, said by phone. “What we’re seeing right now with the selloff both in equity and bond markets is that those are in effect helping the Fed achieve its goals.”

Pain is already gripping markets as bonds and stocks suffered a rare, concerted selloff, while the dollar spiked higher against other currencies after Powell’s more hawkish message on monetary policy last Friday.

To see how much stress is building in financial markets, consider Goldman Sachs Group Inc.’s gauge of US financial conditions. After easing since mid-June, the measure has become tighter again, with its increase over the past 150 days ranking among the fastest in decades.

“The falling stock market, fears of recession, those are going to affect the way that consumers behave and the financial decisions that they take regarding larger purchases and buying up houses,” Fiona Cincotta, senior financial markets analyst at City Index, said by phone. “The bull run that we’ve had over the last decade has driven consumer behavior. But now I think we can expect this economic slowdown to ripple out across the economy.”