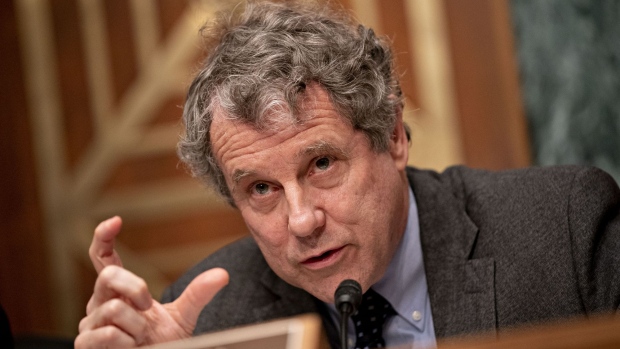 Senator Sherrod Brown, a Democrat from Ohio and ranking member of the Senate Banking Committee, questions witnesses during a confirmation hearing in Washington, D.C., U.S, on Thursday, Feb. 13, 2020. Two wildly different economists who are testifying have become part of President Donald Trump's contentious effort to shake up the Fed and its powerful board of governors. , Bloomberg

Brown, a Ohio Democrat, opened the proceedings Wednesday with a blistering attack on how banks operate, arguing that their business model is “built on short-term profits at the expense of long-term growth for everyone.” He challenged the the chief executive officers to “be as good to the American people as the nation has been to you,” noting that taxpayers spent billions to rescue banks during the 2008 financial crisis.

When employees get sick or lose their jobs, they “don’t get a taxpayer bailout.” Brown said. “And they all remember that Wall Street did.”

The remarks set the tone for what’s expected to be hours of tough questions over issues ranging from workforce diversity to minority lending and executive pay.

The hearing is the first time the CEOs have been called before the panel -- and, much to the chagrin of some in the industry, it may also not be the last. Brown’s title for the event: ”Annual Oversight of Wall Street Firms.”

In their opening statements, the executives pointed out the leading role that big banks played in getting out billions of dollars in government stimulus and assistance for businesses and homeowners jolted by the pandemic. As for their own firms, the leaders noted, they remain well-capitalized and didn’t struggle during the market turmoil caused by Covid-19.