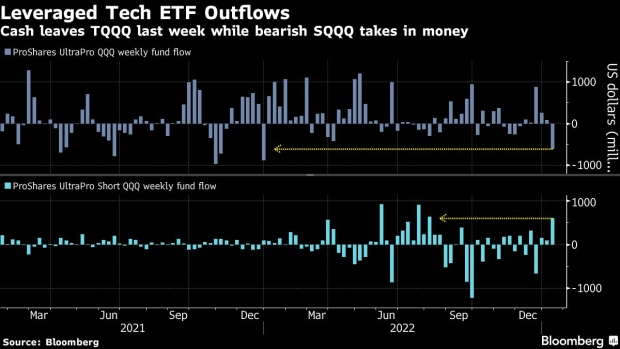 (Bloomberg) -- A chart breakdown in the S&P 500. Signs of complacency in a closely watched options gauge. Weak readings on the economy piling up. All of it is evidence to bears that the rally in stocks is sputtering out.

Equities declined Wednesday for the second straight day — the first time that’s happened this year — as investors once again started fretting over economic growth and just how much more the Federal Reserve might raise interest rates. It’s all been fodder for bears who had been warning that however good the rally thus far this year might have felt — bringing the S&P 500 as much as 4% higher — it wasn’t likely to last.

“Bear markets are like a Hall of Mirrors, designed to confuse investors and take their money,” wrote Morgan Stanley strategists led by Michael Wilson. “We advise staying focused on the fundamentals and ignoring the false reflections.”

The S&P 500 this week butted up against it 200-day moving average at around 4,000, but failed to meaningfully rally above it amid two consecutive days of losses. It was the benchmark’s fifth such attempt over roughly the past year to bust out above the long-term line, according to John Gagliardi at Fidelity Investments.

“Maybe the fifth time will be the charm, but every other time — the last four attempts — have been a fail,” he told Bloomberg TV this week. The index ended Wednesday around 3,929.

Stocks declined on Wednesday, with the S&P 500 losing 1.6% and the Nasdaq 100 dropping 1.3%. That happened as weak economic data rekindled concern over the outlook for growth — growth in producer prices fell more than expected last month, and the drop in retail sales exceeded estimates. Plus, business equipment production slumped, with a decline in factory output wrapping up the weakest quarter for manufacturing since the onset of the pandemic.

“The US economic data was weaker than expected and is creating an emerging concern about the Fed funds hikes finally catching up to the economy,” said Michael O’Rourke, chief market strategist at JonesTrading.

Bears have plenty of other worrying indicators to point to, including the Cboe VIX Index — the fear gauge — dipping below 20 last week, something that in the past had coincided with a reversal in rallies for stocks. It happened in four prior instances since the S&P 500 rout began a year ago — first, in the winter, then April, August and December 2022. While the VIX trading in the mid-20s has been unexpectedly common throughout the year as flushed-out stock positioning weakened the need for protection and kept emotions in check, the drop below the psychologically important 20 line has signaled complacency has gone too far. The gauge finished Wednesday above 20.

“It feels like a fickle start to the week,” said Shawn Cruz, head trading strategist at TD Ameritrade. “There’s a long way to go before we can say risk sentiment has turned the corner.”

Leveraged exchange-traded funds highlight a fading bullish impulse as well. More than $600 million exited the ProShares UltraPro QQQ ETF (ticker TQQQ) — which tracks triple the performance of the tech-heavy Nasdaq 100 — last week in the biggest withdrawal since late 2021, Bloomberg data show. On the other side of the trade, the ProShares UltraPro Short QQQ ETF (SQQQ) — which provides exposure to three times the inverse performance of the tech-heavy index — absorbed nearly $600 million in its biggest weekly influx since August.

Morgan Stanley’s Wilson is looking at the spread between his firm’s earnings model and consensus forecasts, which he says is nearly twice as wide as it’s ever been. It “suggests a drawdown in stocks for which most are not prepared,” his team wrote in a note. The main culprit, he said, is the elevated inflationary environment which could “play havoc” with profitability. “Our negative operating leverage thesis remains underappreciated and will likely catch many off guard starting with this earnings season,” they said.

On Friday, the S&P 500 closed above its 200-day moving average but failed to sustain it. And until it can meaningfully break above this important level, technicians will remain uneasy that the latest attempt could be just another failed rally, wrote Bespoke Investment Group strategists in a note this week.

There are two key factors to the current 200-day moving average, according to Matt Maley, chief market strategist at Miller Tabak + Co. For one, the 4,000 level is a psychologically important round number. Second, it’s also right around where the trend line from 2022’s all-time highs converges.

“They all meet around 4,000, so it’s a very important technical level,” he said in an interview. “If it can’t gather itself within the next couple of days and break above it, it’s going to be a problem.”

“If you were able to get above that, I think the technical trends would improve,” he said in an upcoming episode of Bloomberg’s “What Goes Up” podcast. “But so far, we’ve failed there.”

--With assistance from Elena Popina and Michael P. Regan.