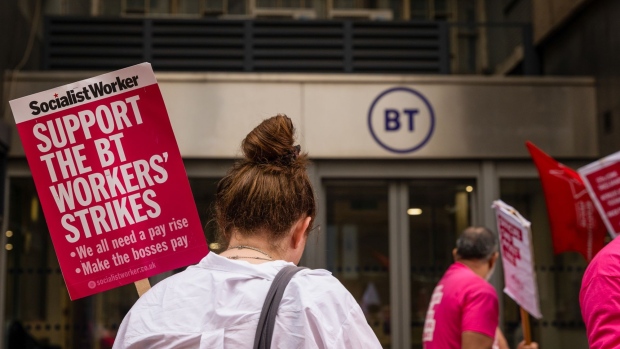 Employees of BT Group Plc, unionized with the Communication Workers Union, stand on a picket line at the BT Tower during a strike in London, UK, on Monday, Aug. 1, 2022. Tens of thousands ofBT's unionized workers voted in favor of the company's first national walkout in more than three decades after the collapse of pay rise negotiations in April. , Bloomberg

BT Group Plc faces walkouts from staff who handle ‘999’ calls for the emergency services, intensifying their dispute on pay amid a national surge in industrial action.

“We will do whatever it takes to protect 999 services – redeploying our people to the most important priority is a normal part of BT operations,” a BT spokesman said by email. “We are profoundly disappointed that CWU is prepared to take this reckless course of action, but we respect the right of colleagues to strike.”

In April, BT implemented a flat pay increase for what it called “front line” workers, which equated to an average 5% increase. That’s against a backdrop of UK consumer price inflation of 9.9%, around a 40-year-high.

“This dispute is modern Britain in a nutshell: lives are at risk because a company’s top brass won’t listen to workers,” CWU general secretary Dave Ward said. “This decision was not taken lightly, but our union’s repeated attempts to initiate discussions was declined by a management who clearly believe they are above negotiating a fair deal for people who make massive profits for them.”