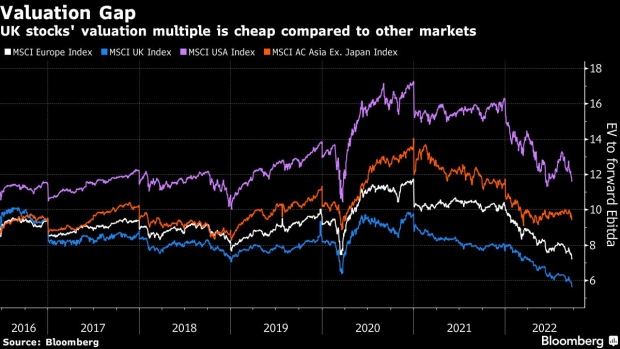 (Bloomberg) -- In a bad year for equities, UK domestic stocks have had a particularly tough time, and that’s not gone unnoticed by dealmakers.

Top of the pile is BT Group Plc, whose largest shareholder, billionaire Patrick Drahi, last month received a nod of approval from the UK government over his late-2021 stakebuilding. The telecommunication company was mentioned in six mergers and acquisitions watch lists, while other UK names to feature highly included Entain Plc, Playtech Plc, Burberry Group Plc and Darktrace Plc.

Low valuations are a key attraction. The UK MSCI United Kingdom Index trades at a 16% discount to its Eurozone equivalent based on forward price-to-earnings multiples and a 45% discount to the US, the biggest since 2005.

“The mismatch between the perceived underlying value of UK companies and their share prices will continue to make UK companies attractive to private equity and trade buyers,” said Ben Kelly, an analyst at Louis Capital Markets. Overseas bidders will also be lured by sterling’s slide and the country avoiding a protectionist stance that could harm trade and productivity, he said.

By industry, telecom operators and technology companies placed highly in the poll. Vodafone Group Plc, Telecom Italia SpA and Telenet Group Holding NV all got mentions, as did Temenos AG and SUSE SA.

According to Danni Hewson, an analyst at AJ Bell Plc, UK technology and telecom firms “look almost irresistibly cheap right now,” with sterling’s slide “creating a sweet spot for foreign investors to swoop in.” The pound continued its descent on Wednesday despite the Bank of England saying it will buy long-dated UK government bonds in whatever quantities are needed to restore order to the market.

Representatives for the top 10 companies in the survey either declined to comment or didn’t respond to requests for comment.

Even though M&A activity generally is dwindling with the era of cheap financing coming to an end, firms in more defensive areas, along with those offering strong growth prospects, are still attracting interest, particularly after this year’s rise in bond yields led to reduced valuations.

“Private equity firms are hunting around, looking to snap up a bargain,” said Susannah Streeter, a senior analyst at Hargreaves Lansdown Plc.

“M&A has cut like a scythe through the UK tech sector this year,” wrote George O’Connor, an analyst at Goodbody.