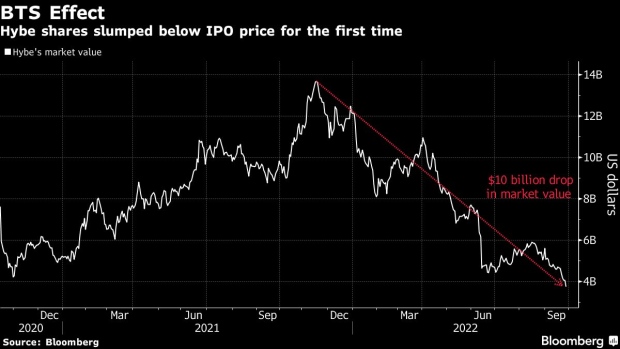 A woman takes a photograph of an advertisement for K-pop boy band BTS displayed in Seoul, South Korea, on Friday, Sept. 18. 2020. Big Hit Entertainment Co., the manager of K-pop boy band BTS, is looking to raise as much as 962.6 billion won ($812 million) in a South Korean initial public offering that is set to be the country’s largest in three years. , Bloomberg

(Bloomberg) -- Shares of K-pop juggernaut BTS’s managing agency tumbled below the initial public offering price for the first time, extending a rout that’s wiped about $10 billion in market value from the peak.

Hybe Co. dropped 7.1% to 130,000 won on Wednesday, below its 135,000 won debut price. The stock has languished since a June plunge when the boy band made a shocking announcement to shift to solo projects, with the members’ looming deadline on military service adding to risks.

Their military duty, mandatory for all South Korean men over a certain age, has reemerged as a national hot potato after the government floated the idea of an opinion poll late August. While the proposal was scrapped within days following public backlash, lingering speculation that BTS may be allowed exemptions to keep performing has been causing wild price swings.

In the nine years since their debut, BTS has racked up record-breaking hits and video views, including the fastest accumulation of No. 1 songs on the Billboard Hot 100 since Michael Jackson. The stock peaked in November 2021 as Hybe announced investments in Korea’s largest crypto exchange.

But even as their global fan base remains intact, share prices have been on a downward trend this year as investors worry over Hybe’s over-reliance on BTS and what would happen if members have to serve the military service which lasts for at least a year and a half.

The group is so huge that a government minister fretted that it would cause a “cultural loss for mankind” if BTS had to suspend its work to enlist. The band’s oldest member Jin, 29, needs to sign up for military service before the end of this year.

(Updates prices as of market close.)