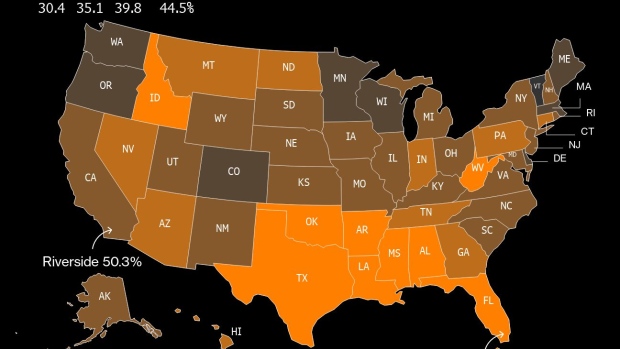 An employee at wears a protective face mask and gloves while ringing up a customer at a supermarket in Miami, Florida, U.S., on Wednesday, July 8, 2020. A day after announcing pending closures, Mayor Gimenez said he had met with medical experts and business leaders and decided that restaurants could still provide outdoor dining and gyms could open if everyone wore a mask. , Bloomberg

(Bloomberg) -- The share of Americans who have a hard time paying their bills is at a pandemic-era high. And nowhere is it higher than in Miami and Riverside, California.

More than half of their residents said it was somewhat or very difficult to cover usual household expenses in a US Census Bureau survey conducted end of July and early August. It’s the first time the percentage tops 50% in the two metropolitan areas, which have experienced some of the biggest increases in rental prices over the past two years.

Nationwide, Mississippi, Alabama and Oklahoma had the largest shares of households facing budget hardship, with Vermont among the lowest. The map of financial stress mirrors that of real wages, which declined the most in southern regions as incomes failed to keep up with soaring consumer prices.

Overall, more than four in ten adults reported difficulty paying their bills in the latest survey, the highest level since the Census started asking the question in August 2020. It implies that almost 92 million families are struggling, up from about 59.4 million a year ago.

Back in the summer of 2020, a third of respondents reported such budget stress. The share fell over the following year, but started rising about a year ago after government pandemic relief ended and inflation took hold.

A separate question highlights the impact from surging energy bills. Nationally, 23.1% of households indicated that they were unable to pay a bill in full in the past year. This is the highest since that question was added a year ago.

Perhaps most troubling, about one in nine US households said that they lack food sometimes or often. This translates to almost 25 million people, of which about half are from families with children under 18.

(A previous version of the story corrected the name of the city in the first paragraph.)