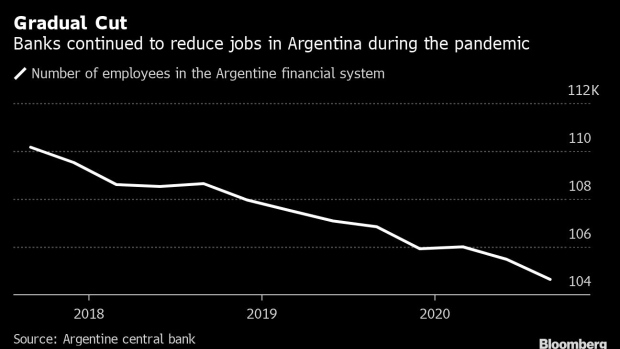 (Bloomberg) -- Several of Argentina’s largest banks succeeded at getting more employees back to headquarters as the virus toll abated in South America’s second-biggest economy. A rising case count now puts that path into question.

About 50% of BBVA Argentina’s bankers are coming in twice a week, though the office is mostly shut Wednesdays for deep cleanings. Banco Santander Rio, the country’s largest private financial institution by assets, reached a goal of having as many as 40% of its employees in the office for at least half of the week last month, according to a person with direct knowledge of the matter who asked not to be identified discussing company policy.

While tellers and other workers who face retail clients returned to their workplaces in the middle of last year, investment bankers, analysts and back-office employees have had a slower comeback amid some 2.4 million coronavirus cases and more than 56,000 deaths. Less than 10% of Argentines have had a first vaccine dose, and the government is warning that cases could flare up again as South America’s winter takes hold.

The country reported a record 20,870 daily cases on Tuesday evening, boosting speculation that authorities will ramp up stay-at-home measures.

Globally, banks have had mixed results trying to cajole employees back into the office. Wall Street firms had to roll back plans after a sharp increase in Covid cases in December and January, and have now leaned toward embracing some form of permanent remote working for many employees even as vaccine rollouts make it less risky to return to the office. In neighboring Brazil, Itau Unibanco Holding SA is weighing allowing a third of its staff alternate between remote work and going to the office.

Argentina has been hard hit by the pandemic despite an initial lockdown that was one of the strictest in the Americas. Now, following a partial reopening, the government is once again reducing flights from neighboring countries and last month published a list of guidelines that would allow provincial authorities to curb certain activities if the need arises. Additional regulations could upend the banks’ current plans.

Here’s how Argentine banks have organized their return to office in recent months: