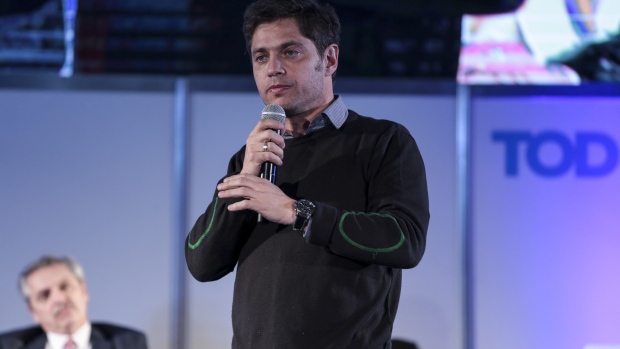 (Bloomberg) -- Argentina’s Province of Buenos Aires and a group of creditors including GoldenTree Asset Management LLC reached an initial agreement to restructure $7.1 billion of overseas debt, paving the way for the South American nation’s largest province to emerge from default.

The province’s economy ministry said in a statement on Wednesday that it agreed “with its principal creditor and a group of other creditors” on terms and conditions. “This is key support to launch a definitive proposal of the debt exchange,” the statement added. The province didn’t specify the percentage of creditors that have accepted the new terms.

The accord marks the first major breakthrough between creditors including GoldenTree and the provincial government after stalling for almost a year. The negotiations had moved to U.S. courts, with creditors boosting a demand by $1.6 billion for missed debt payments early this month, as negotiations had yielded little progress and the province extended the same debt offer more than a dozen of times.

Buenos Aires’ defaulted debt is the country’s largest outstanding amount since the national government restructured $65 billion last year and after about a dozen provinces struck agreements with creditors, from Jujuy in the north to Chubut in the south. Home to almost 18 million people and accounting for two-fifths of Argentina’s gross domestic product, Buenos Aires’ debt represents around half of the total dollar debt from regional governments.

The invitation will expire on August 13 and the results will be announced three days later, while its settlement is scheduled on August 20.

The proposal cuts total payments due by $4.5 billion through 2024, and includes an average coupon of 5.6%, according to the province. The first coupon payment is set in September and the earliest capital payment is in March 2024.

Argentina is in its third year of recession, with inflation above 50% and unemployment over 10%. The country is also seeking to reworks a $45 billion credit it owes to the International Monetary Fund.