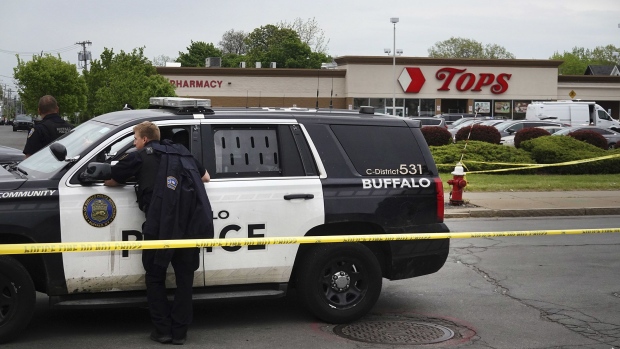 BUFFALO, NEW YORK - MAY 16: Police and FBI agents continue their investigation of the shooting at Tops Market on May 16, 2022 in Buffalo, New York. A gunman opened fire at the store yesterday killing ten people and wounding another three. The attack was believed to be motivated by racial hatred. (Photo by Scott Olson/Getty Images) , Photographer: Scott Olson/Getty Images North America

(Bloomberg) -- New York-based M&T Bank Corp. said the bank would increase security at certain branches as its top executive and other firms condemned Saturday’s racist attack in the city.

“We will not allow one man to break the bonds that hundreds of thousands have forged,” M&T CEO Rene Jones, who is one of finance’s few senior Black executives, said Monday in an emailed statement. “Instead, we will stand together with our friends and neighbors when they need us most.”

Ten people were shot to death at a Buffalo grocery store Saturday, in what authorities are calling a racially motivated hate crime. Police said 11 of the 13 people shot were Black, and an 18-year-old White man was arrested as the suspected gunman.

Citigroup Inc., which has more then 2,000 employees in Buffalo, denounced the attack and pledged $100,000 to the United Way of Buffalo and Erie County, according to a memo seen by Bloomberg News. The company’s Black heritage network on Monday hosted an open session for employees to express their feelings and learn about available services.

“Acts of violence like this impact us all, and we are shaken to our core,” Tony Vazquez, who heads Citigroup’s Buffalo site, wrote in the memo. “Citi remains committed to equity for all and denounces racism and acts of hatred. We all have the right to feel safe at home, at work, and out doing basic things like food shopping in our community.”

Bank of America Corp. struck a similar chord, with Buffalo President Ted Janicki extending his condolences and reminding employees they can access confidential counseling services, according to an internal memo seen by Bloomberg.

“Our thoughts are with the Buffalo community for the lives lost, the families impacted and the healing of our city,” Janicki said in a statement.

The attack comes as Wall Street continues to grapple with diversity and inclusion in the wake of George Floyd’s murder at the hands of police in 2020. Banks have pledged billions to support racial equality since then, even as they struggle to hire, promote and retain Black talent.