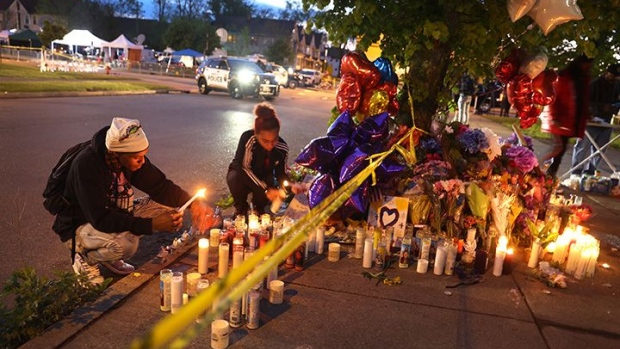 BUFFALO, NEW YORK - MAY 16: Mourners light candles at a makeshift memorial outside of Tops market on May 16, 2022 in Buffalo, New York. A gunman opened fire at the store yesterday killing ten people and wounding another three. The attack was believed to be motivated by racial hatred. (Photo by Scott Olson/Getty Images) , Photographer: Scott Olson/Getty Images North America

(Bloomberg) -- President Joe Biden will visit Buffalo on Tuesday to honor the victims of what authorities are calling a racist mass shooting, as Washington remains paralyzed around issues of gun violence and extremism.

The massacre at a supermarket in a mostly Black neighborhood on Saturday left 10 people dead and three wounded. The killings, which are being investigated as a racially-motivated hate crime, renewed calls among congressional Democrats for stricter gun control legislation and stronger hate-crime laws. But Capitol Hill action on such intractable, divisive issues is highly unlikely with midterm elections just months away.

That leaves Biden with little to offer in the way of policy changes to yet another community in mourning from racist violence. The visit comes as the president grapples with daunting challenges -- inflation, record-high gasoline prices, a shortage of baby formula and an overall increase in violent crime -- that have Democrats poised for a wipe-out in November.

The president and first lady Jill Biden plan to meet with relatives of victims as well as emergency workers and community leaders. They will “express gratitude for the bravery of members of law enforcement and other first responders who took immediate action to try to protect and save lives,” White House Press Secretary Karine Jean-Pierre said Monday.

In Buffalo, Biden will underscore the threat of hate crimes and renew his plea for new gun restrictions, according to a White House official.

The shooting has caused blowback for some conservative lawmakers, candidates and commentators who’ve espoused versions of the “replacement theory” that apparently inspired the alleged gunman, an 18-year-old White man.

According to the fringe theory, Jewish-controlled elites are trying to dis-empower White Americans. The gunman, identified as Payton Gendron, reportedly wrote in a manifesto that shoppers at the supermarket came from a culture seeking to “ethnically replace my own people.” Eleven of the 13 people shot were Black.

The authorities have not yet confirmed the authenticity of the document.

The suspect spoke explicitly about his plans to commit a terrorist act on the popular chat app Discord since at least last December, according to logs of his posts reviewed by Bloomberg.

“A racially motivated hate crime is abhorrent to the very fabric of this nation,” Biden said Sunday in a statement. “We must do everything in our power to end hate-fueled domestic terrorism.”

Representative Liz Cheney, a Wyoming Republican, accused her party’s leadership of enabling “white nationalism, white supremacy and antisemitism” and pressured them to root it out.

Representative Adam Kinzinger, an Illinois Republican, accused Representative Elise Stefanik of New York, who replaced Cheney as the No. 3 House Republican a year ago, of pushing replacement theory.

Kinzinger cited a Stefanik ad posted on Facebook showing images of migrants crossing the border over the text: “Radical Democrats are planning their most aggressive move yet: a PERMANENT ELECTION INSURRECTION.”

Stefanik senior adviser Alex DeGrasse on Monday called any attempt “to blame the heinous shooting in Buffalo on the congresswoman is a new disgusting low for the Left, their Never Trump allies, and the sycophant stenographers in the media.”

Democrats have repeatedly tried and failed to enact new gun-control measures -- such as universal background checks and an assault weapons ban -- in the decade since a gunman killed 26 people, most of them first graders, at the Sandy Hook elementary school in Newtown, Connecticut.

Efforts to advance bipartisan background-check legislation sputtered last year in the evenly divided Senate, even after a mass shooting that targeted Asian-owned businesses in the Atlanta area.

The inaction has led Biden to resort to executive measures, which are limited in scope, to address the problem.

The president last month announced a rule to crack down on the manufacture and sale of so-called “ghost guns” that are homemade and lack serial numbers, making them hard to trace.

Biden nominated Steven Dettelbach to lead the Bureau of Alcohol, Tobacco, Firearms and Explosives. The former federal prosecutor would be the first permanent agency chief since 2015, if confirmed by the Senate.

The apparent motives in the Buffalo shooting pose another challenge for Biden, who said he was inspired to run for president by the 2017 White nationalist march in Charlottesville, Virginia, that was fueled by replacement theory adherents. Gunmen who carried out mass shootings in Pittsburgh and El Paso in recent years also cited an immigrant “invasion” as their motivations.

Just under 62% of single-incident hate crimes reported in 2020 targeted people based on their race or ethnicity, Federal Bureau of Investigation data show. Anti-Black racism drove a plurality of those crimes. That year also saw a 6.1% overall increase in hate crimes from 2019, though the 2020 number is likely an undercount.

Yet preventing hate crimes often falls to state and local authorities. Homeland Security Secretary Alejandro Mayorkas said his department had issued an “unprecedented number” of alerts to police departments warning of people who are “descending into violence by reason of an ideology of hate, or false narrative.”

Senate Judiciary Committee Chair Dick Durbin said Monday that the panel would soon hold a hearing on domestic terrorism. “We have to break down these groups. They are recruiting young people into their ranks,” he told Bloomberg Television.

The suspect in the Buffalo shooting was investigated less than a year ago by New York state police after they received a report he made threats at his high school, according to the Washington Post.

New York State leaders said Sunday they would explore new regulations on social media companies and gun manufacturers in response to the shooting, which the gunman live-streamed via Twitch.