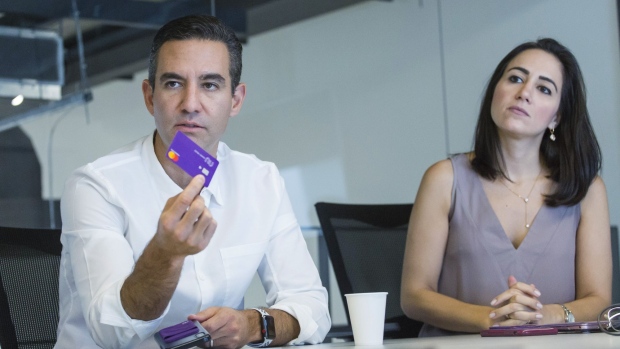 David Velez, founder and chief executive officer of Nubank, left, speaks while holding a credit card as Cristina Junqueira, co-founder and vice president of branding and business development at NuBank, listens during an interview in Sao Paulo in 2019. , Bloomberg

(Bloomberg) -- Nu Holdings, the Brazilian digital bank backed by billionaire Warren Buffett’s Berkshire Hathaway Inc., is considering scaling back the potential valuation of its initial public offering, according to people familiar with the matter.

Nubank, as the firm is known, has weighed trimming the proposed price range of $10 to $11 per share following a global rout in technology stocks, the people said, asking not to be identified because the matter isn’t public. A potential new price range couldn’t be learned, deliberations are ongoing and no final decision has been made.

Nubank declined to comment. The bookbuilding process is slated to start on Nov. 30, with the price set on Dec. 8, according to Brazilian regulatory filings.

The Nasdaq Composite Index closed down 2.2% on Friday as investors plowed into havens after news of the omicron coronavirus variant rattled markets. It bounced back Monday, climbing as much as 2.1%. The Solactive FinTech Index, which tracks stocks including SoFi Technologies Inc. and Intuit Inc., is down 11% since the start of the month.

Nubank first disclosed details of the IPO in early in November. Plans were to raise more than $3 billion, making it the third largest on a U.S. exchange in 2021 and valuing the firm at as much as $50.6 billion, according to the prospectus. It would list Class A ordinary shares on the New York Stock Exchange while having Brazilian depositary receipts, known as BDRs, trading on the Sao Paulo stock exchange.

Morgan Stanley, Goldman Sachs Group Inc. and Citigroup Inc. are among banks handling the offering. Shares are expected to trade under the symbol NU, while BDRs will trade under NUBR33.