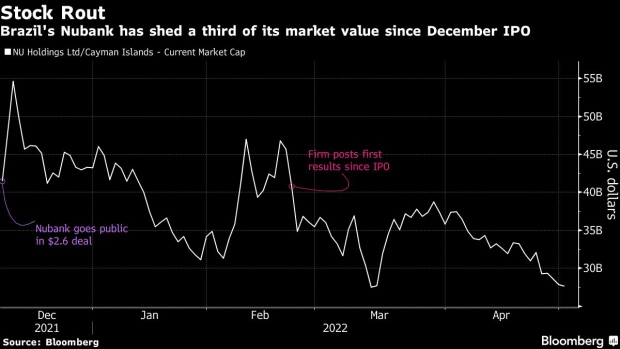 Sao Paulo-based Nubank has already shed about a third of its market value less than five months after going public amid a global rout in tech stocks and concern whether the fintech firm can deliver on promised growth as credit quality deteriorates in Brazil.

The embattled stock now faces another key event -- around $26 billion in shares of the world’s biggest standalone digital bank will be able to hit the market starting May 17, following Nubank’s first-quarter results and when a sale restriction following its December initial public offering is set to expire. In the run-up to that deadline, the threat of further downside looms as traders assess the potential impact of the overhang from founders and other stakeholders cashing in on holdings.

The end of lock-up is among “key risks to our investment view,” Goldman Sachs Group Inc. analysts led by Tito Labarta said in a report on April 29. Goldman, which rates the stock a buy, initiated coverage last month with a price target that implies about a 100% upside from current levels.

The amount to be released represents over 90% of total shares, according to Bloomberg’s estimates based on corporate filings. That’s because share price conditions at two prior release dates weren’t met, leaving the date in two weeks, when there are no price restrictions, as the third and final window to end the lock-up.

Of course, Nubank’s founders and its main investors, which also include Tencent Holdings Ltd., DST Global and Sequoia Capital, could still hold on to the stock, waiting for Nubank’s long-term promise of changing Latin America’s financial system for good. But the loss in value of the shares does little to shore-up confidence at least in the short-term.

After one of the most anticipated IPOs of last year, Nubank has seen its market cap plummet to $28 billion -- lower than the level at a private fundraising back in June, when Berkshire agreed to purchase a $500 million stake, valuing Nubank at $30 billion. Short interest has also been on a rise, surging back above 6% of the float in the past few weeks, according to S3 Partners data.

Some of the blame lies on the global rout after the Federal Reserve’s hawkish tilt sent U.S. yields surging, weighing especially on high-growth, tech firms. But there are also questions about the firm’s outlook, notably with Brazil hurt by surging inflation and higher interest rates. Nubank’s consensus rating -- a proxy for its ratio of buy, hold, and sell ratings -- is 3.68 out of five, Bloomberg data show.

Nubank ended last year with over 53 million customers in Brazil, Mexico and Colombia. It sells a range of financial products vowing cheaper fees and less red-tape, in a region where a large chunk of the population is unbanked.