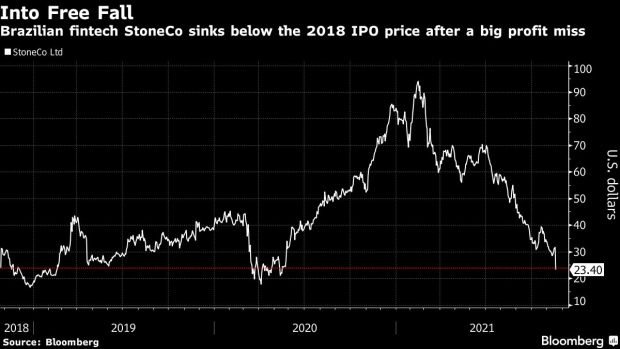 (Bloomberg) -- Brazilian payments firm StoneCo Ltd. plunged the most on record after disappointing results in the third quarter cast further doubt on the company’s recovery.

The fintech, which counts Warren Buffett’s Berkshire Hathaway Inc. among its backers, posted an adjusted net income of 132.7 million reais ($24 million) for the quarter, falling short of the average analyst estimate of 207.8 million reais and down 54% from a year earlier. Results were hurt by higher funding costs amid Brazil’s sharp monetary tightening and by a jump in operating expenses as the firm steps up investments.

Shares of StoneCo fell as much as 34% to $21.02 in New York on Wednesday, well below its 2018 initial public offering price of $24. The stock is down over 78% since peaking last February, having shed more than $22 billion in market value during the period.

The company’s credit business has been under particular scrutiny since the company struggled with higher provisions a quarter earlier, with growing bad loans forcing it to halt lending. The company expects to resume lending by the first quarter of next year.

“The reality is that Stone without credit is not just much less profitable than investors were expecting, but it is also less profitable than the old Stone,” BTG Pactual analysts led by Eduardo Rosman wrote in a report Wednesday. “We are likely going to need to revise our estimates for 2022 by quite a lot.”

Last week, shares of rival Pagseguro Digital Ltd. gained after the firm boosted its volume growth guidance for the year and delivered an upbeat message on prospects for its digital-banking unit PagBank.

Stone, which was co-founded in 2012 by Andre Street and Eduardo Pontes, started by offering payment technology to merchants around Brazil. It later branched out to lending, offering money to small and medium-sized businesses by using credit-card purchases as collateral.

(Updates size and scope in first paragraph and stock move in third paragraph.)