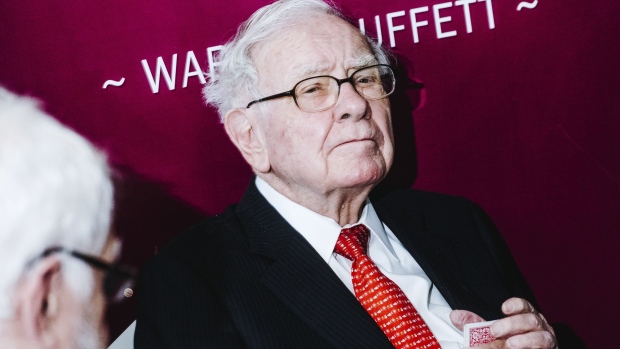 Warren Buffet, chairman and chief executive officer of Berkshire Hathaway Inc., plays bridge at an event on the sidelines of the Berkshire Hathaway annual shareholders meeting in Omaha, Nebraska, U.S., on Sunday, May 6, 2019. The annual shareholders' meeting doubles as a showcase for Berkshire's dozens of businesses and a platform for its billionaire chairman and CEO to share his investing philosophy with thousands of fans. , Bloomberg

(Bloomberg) -- Warren Buffett donated Berkshire Hathaway Inc. stock valued at more than $758 million to charities, including one named after his late wife.

Buffett, 92, is the world’s sixth-richest person with a $110.4 billion net worth, according to the Bloomberg Billionaires Index. His fortune has gained $1.5 billion this year, even as the net worths of most of those on the ranking declined amid market turmoil. His wealth would be considerably higher were it not for his charitable donations.

In 2010, he started the Giving Pledge, with his friends Bill Gates and Melinda French Gates, saying he would donate 99% of his fortune, either in his lifetime or at his death. He’s already given more than $32 billion worth of Berkshire stock to the Bill & Melinda Gates Foundation and has given regularly to his family members’ foundations.