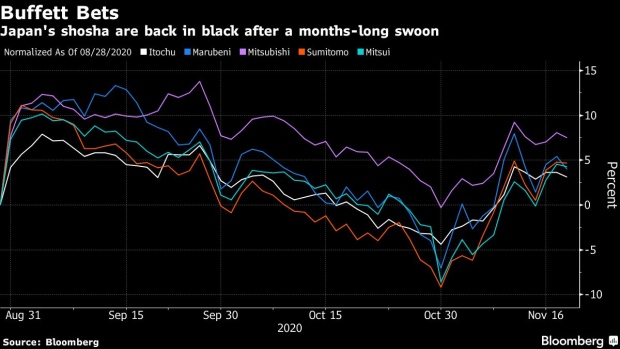 (Bloomberg) -- Warren Buffett’s $6 billion investment in Japanese trading companies is paying off amid the global rotation into value stocks.

Shares of the five commodity-centric Japanese conglomerates in which Buffett’s Berkshire Hathaway Inc. announced its stake purchase in August have all climbed at least 8% so far in November, with Sumitomo Corp. leading the way with an advance of more than 15%.

The so-called “sogo shosha” had all incurred losses over the two-month period ended Oct. 30 as the coronavirus pandemic eroded demand for commodities and investors continued to show a preference for growth stocks over their value peers.

Euphoria over a vaccine breakthrough has boosted optimism about the global economic recovery, prompting investors to snap up beaten-down cyclical stocks, of which Japan has plenty. Buffett’s stake purchase in Itochu Corp., Marubeni Corp., Mitsubishi Corp., Mitsui & Co. and Sumitomo is one of his largest-ever forays into Asia’s second-largest economy.

The recent outperformance of these diversified conglomerates is tied to the wider rotation into cyclical value in Asia and around the world, according to Nader Naeimi, head of dynamic markets at AMP Capital Investors Ltd.

“Profit-making but economically sensitive areas have been totally left behind,” Naeimi said. “When global excess money supply is plentiful, that leaves plenty of room for re-rating in the forgotten areas. Warren’s allocation into trading houses -- financial stocks -- reflects that.”

The improving economic outlook is starting to show in the performance and projections by some of the trading firms.

Marubeni earlier this month boosted its net income forecast for the full year, with the guidance beating the average analyst estimate. It also raised its full-year dividend. Meanwhile, Itochu reported record quarterly earnings. The firm is committed to meeting full-year targets for profit and dividend payments, CFO Tsuyoshi Hachimura said in a briefing on Nov. 4.

“Having Buffett’s name behind the stocks makes them an easier buy for those who may be less familiar with Japan,” said Mio Kato, founder of LightStream Research in Tokyo.

Still, challenges to the outlook remain, especially as a wave of Covid-19 cases in the U.S. and Europe threatens to cause more disruptions in commodity markets and hinder a sustained recovery in demand.

Japanese stocks slumped Wednesday to lead losses in Asia after a report showed Tokyo had a daily record of coronavirus cases. The city is making arrangements to raise its Covid-19 alert to the highest level, according to a separate report.

The benchmark Topix is up 9% so far in November, just behind the 10% rise in the MSCI Asia Pacific Index.

“My sense is that the genuine optimism isn’t quite as strong as market moves could leave one to believe, but it is an incremental positive for names which have been ignored or left out of the tech-led rally and then suffered due to lockdowns,” said Kato of LightStream.

(Updates with market moves in penultimate paragraph. A previous version corrected the spelling of Buffett in ninth paragraph)