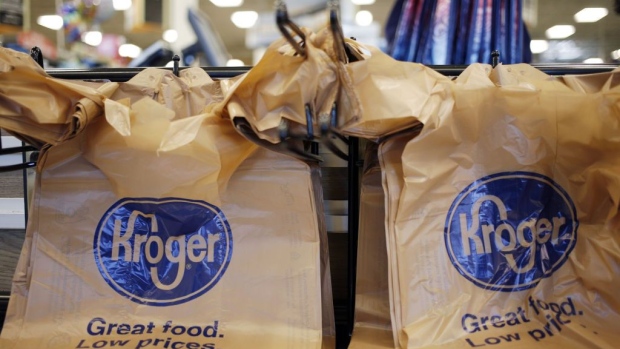 (Bloomberg) -- Warren Buffett’s Berkshire Hathaway Inc. piled funds into biotechnology company Biogen Inc. and supermarket operator Kroger Co. as it trimmed some of its bank wagers in the last few months of 2019.

Berkshire’s Kroger investment, which totaled $549 million at the end of the year, was disclosed more than a year after Buffett’s conglomerate sold off its stake in retailing giant Walmart Inc. The company also built a $192 million stake in Biogen while trimming its stakes in Wells Fargo & Co., Goldman Sachs Group Inc. and Bank of America Corp., according to a regulatory filing Friday.

Kroger shares surged in late trading, with the stock up 5.6% to $29.81 at 4:59 p.m. in New York. Buffett’s company is wagering on a business that’s trying to navigate a shifting retail landscape, with challenges from online grocery companies and discounters including Walmart, a company that Berkshire eventually exited in 2018.

Biogen stock also climbed, rising 1.6% to $338.40 after Berkshire disclosed its holding. The Omaha, Nebraska-based conglomerate hasn’t historically been a big investor in the biotechnology industry, although the company already owns a stake in pharmaceutical company Teva Pharmaceutical Industries Ltd.

Both the Biogen and Kroger stakes are small in comparison with some of Berkshire’s biggest bets. The company’s Apple Inc. holding, which was cut 1.5% in the fourth quarter, was valued at $72 billion at the end of the year.

Buffett’s company has been trimming its stakes in some major lenders to try to avoid crossing a 10% ownership threshold that often draws regulatory scrutiny. He was closer to that level with Wells Fargo and Bank of America, but holds a stake of only about 3.4% in Goldman Sachs.

Here’s some other key takeaways from Berkshire’s 13F: