Warren Buffett’s Berkshire Hathaway Inc. now has a record amount of money to put to work.

Berkshire’s cash pile hit new heights at US$149.2 billion of funds in the third quarter, surpassing a record set in early 2020, the company said in its earnings report Saturday. The fresh high came even as Buffett poured more money into buying back its own stock with US$7.6 billion of repurchases in the period -- the third-highest tally since the board changed its policy on buybacks in 2018.

Buffett has struggled with a high-class problem of having too much money in Berkshire’s pockets and not enough chances to put that to work in higher-returning assets. With no major deals in recent quarters, Berkshire’s chief executive officer has frequently turned to buybacks as one way to deploy the cash deluge. But even the heightened level of buybacks during the third quarter wasn’t enough to keep Berkshire’s coffers from swelling. 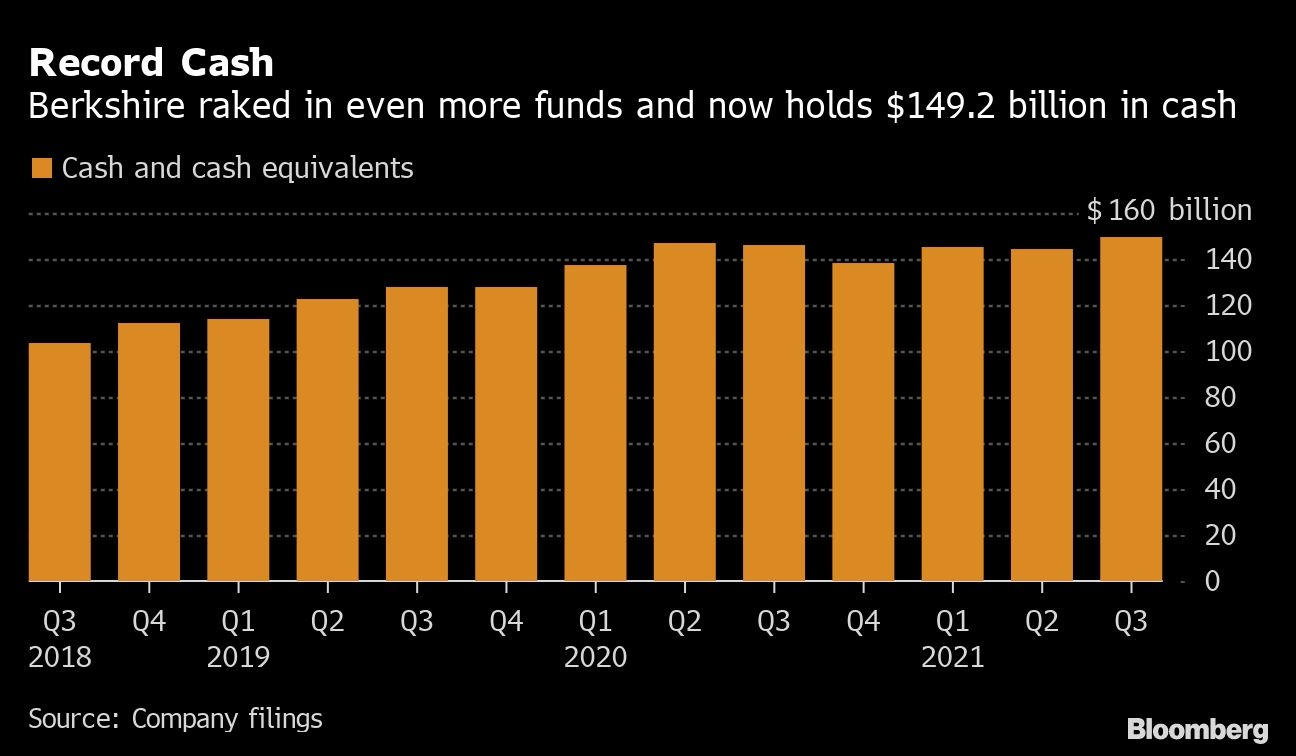 The sprawling conglomerate has benefited as many of its vast array of businesses bounced back from the initial throes of the pandemic, which helped boost operating profit 18 per cent in the third-quarter. Berkshire’s railroad generated record earnings even as the industry grappled with supply chain pressures, while the company’s energy businesses posted their highest profit in data going back to mid-2009.

Buffett’s company was helped by strong consumer demand for products, but warned in its report that “several of our businesses experienced higher materials, freight and other input costs attributable to ongoing disruptions in global supply chains.” Its collection of manufacturing, servicing and retailing operations posted the third-highest level of profit in data going back to the middle of 2009, an increase of 15 per cent compared to the year-ago period.

That strength helped compensate for a weak quarter for Berkshire’s insurers. The underwriting loss at that group of businesses widened to US$784 million during the third quarter, with all three of its major insurance groups reporting losses in underwriting. Catastrophe losses, including the sting of Hurricane Ida, totaled US$1.7 billion after taxes during the period. Geico, meanwhile, is feeling the pressure as more drivers hit the road, leading to an increased frequency of claims. The severity of claims is also rising just as used car prices tick up.

Berkshire’s net income fell 66 per cent to US$10.3 billion during the third quarter compared to the same period a year earlier, according to the company’s statement. That figure includes swings in the conglomerate’s nearly US$311 billion stock portfolio. The business’s Class A shares were down just slightly, a 1.7 per cent decrease, during those three months ended September 30.