To start, Berkshire Hathaway Inc.’s operating profit topped its best levels. That was lifted by record earnings from BNSF railroad, his biggest-ever acquisition. Gains on his stock bets pushed the conglomerate’s 2019 net income to a staggering US$52 billion, making Berkshire the most profitable public company in the world.

And the legendary investor now has more cash than ever to play with: US$128 billion. That’s the record which has Berkshire’s stock languishing as investors grapple with a question amid all the superlatives: What comes next?

“Berkshire has sort of an embarrassment of riches,” Cathy Seifert, an analyst at CFRA Research, said in an interview. “That cash might be burning a hole in their pocket and it’s prudent for them to be careful, but at some point, it almost becomes a burden to the extent that it’s going to drag down their overall returns.”

Buffett, 89, has built the most valuable public company outside of the West Coast with major businesses in industries from energy and insurance to car dealerships and jewelry. Now he faces the rare issue where he can write a single check for $10 billion and face questions on whether he’s being aggressive enough. 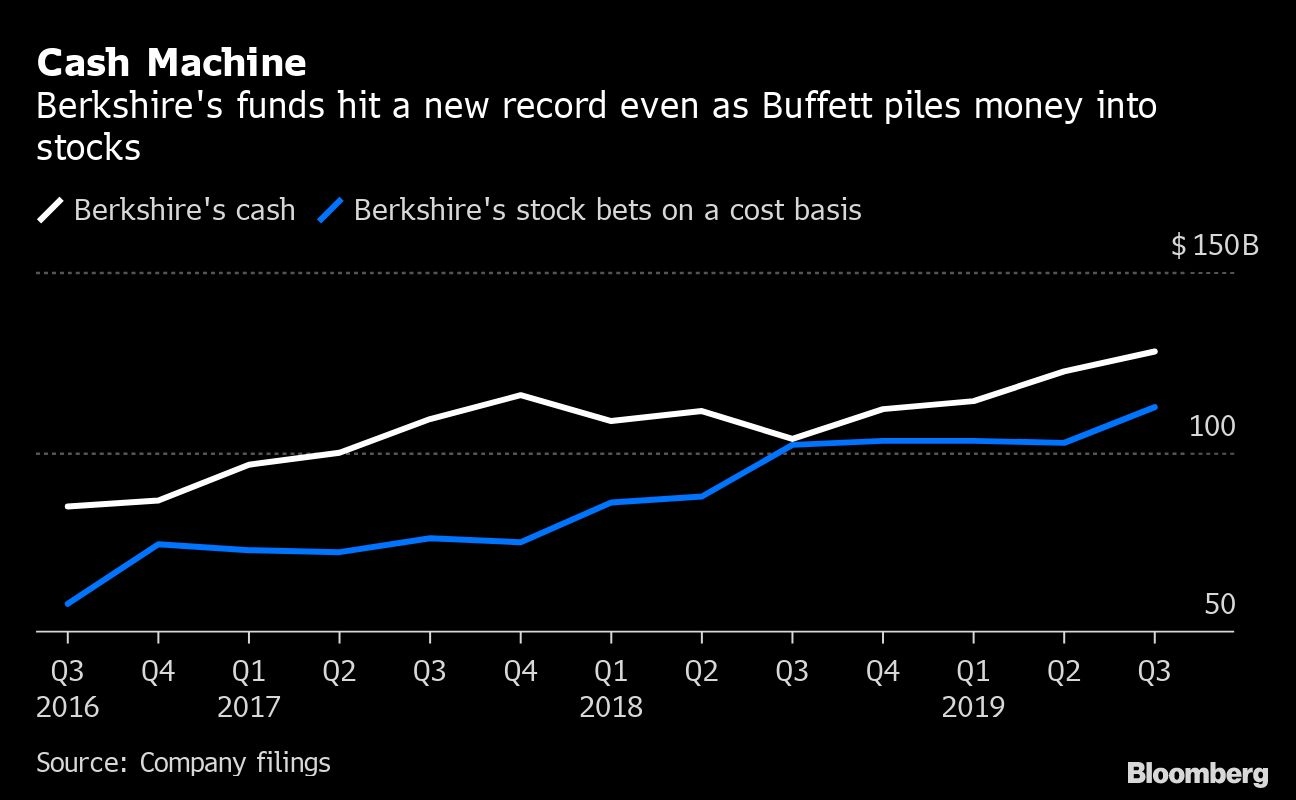 Buffett’s cash pile climbed again in the quarter, and his liquidity brings him potentially lucrative deals like crisis-era bets on Goldman Sachs Group Inc. and General Electric Co., and the third quarter’s US$10 billion investment in Occidental Petroleum Corp. that allowed a deal with Anadarko Petroleum Corp.

But aside from the Occidental bet, Buffett was a net seller of stocks in the quarter and deals spurred by turmoil are harder to find with the S&P 500 Index hitting fresh highs. And Berkshire hasn’t kept pace this year. Berkshire’s Class A shares are up 5.7% this year through Friday, short of the 22 per cent gain in the S&P 500.

The period also provided examples of the limits Buffett faces in trying to put cash to use to continue the outsized growth that made him famous. He’s pushed further into financial stocks, but in his two biggest stakes, he’s right around regulatory caps on bank ownership. With Bank of America Corp., he applied for permission to potentially boost his holding; on Wells Fargo & Co., he sold shares in the quarter.

Buffett has conceded that the immediate prospects for buying up businesses isn’t good amid “sky-high” prices. But he said he still hungers for an “elephant-sized acquisition.”

Buffett benefits from being selective on what deals he chooses, even if it means he spends time waiting around with US$128 billion sitting in cash and Treasury bills, said shareholder Thomas Russo.

“The Occidental thing came to Berkshire, no one else, for a reason --- they wanted his stamp,” Russo, who invests in Berkshire through his firm Gardner Russo & Gardner, said in an interview. “That stamp is only valuable if people think that the investments that he makes have been well-scrubbed, rather than rushed through.”

While Buffett’s been stymied on the large acquisition front in recent years, he’s been able to put some money to work in the stock market. In recent years, Berkshire’s snapped up shares of JPMorgan Chase & Co. and Apple Inc. One of Buffett’s investing deputies even purchased shares of Amazon.com Inc. this year. But there are limited stocks that even have the potential to move the needle.

There are roughly 55 U.S. companies Buffett could invest US$10 billion in and remain under his preferred 10 per cent ownership threshold. He already owns a stake in 13 of them and has previously bet on at least another eight. About a dozen of the companies would be considered technology investments, a sector Buffett’s started to venture into after years of trying to avoid the industry.

“The anchor of size is just an enormous issue,” said Paul Lountzis, president of Lountzis Asset Management which oversees more than $200 million including investments in Berkshire stock. Lountzis said Buffett’s track record and ability to adapt reassures him. Still, “he’s so big now, where’s he going to deploy things? And where can things go from here? It’s a real challenge.”

And such sizable stakes can make Berkshire less nimble. Buffett acknowledged as much with this year’s struggles at Kraft Heinz Co., as he said in February ditching a stake of more than $10 billion would be complicated.

As crisis-era bets such as his equity derivative wagers have started to run out, Buffett’s sought other ways to deploy capital. Berkshire’s board loosened its buyback policy last year. That’s allowed him to repurchase US$2.8 billion over the course of 2019. Those moves have been relatively modest -- JPMorgan spent more than US$6 billion on net repurchases in the third quarter alone -- but it’s a marked change for an investor that’s preferred to spend his money buying operating businesses or snapping up stocks of other companies.

The widest performance gap between Berkshire and the S&P 500 in recent years could give Buffett more incentive to jump into the market for his own stock.

“There isn’t a lot of opportunity” for big deals, Jim Shanahan, an analyst at Edward Jones, said in an interview. “All the more reason to question, given the valuation for the stock, why they haven’t been more aggressive in the market buying back their own shares. It could represent the best use of cash right now and it could represent the easiest path for them to deploy capital.”