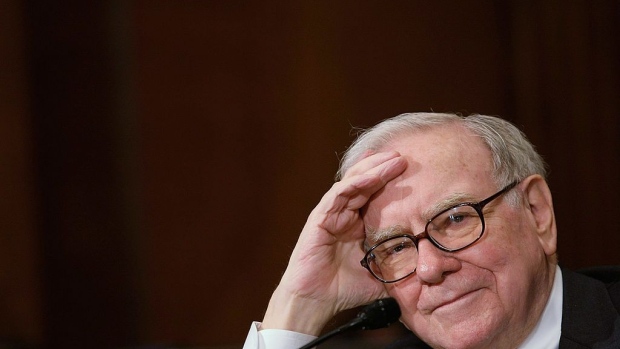 Berkshire Hathaway Chairman and CEO Warren Buffett listens during a hearing before the Senate Finance Committee November 14, 2007 on Capitol Hill in Washington, DC. The hearing was to examine the uncertainty in federal estate tax planning under current law which will change every year from 2008 through 2011. , Alex Wong/Getty Images North America

(Bloomberg Opinion) -- If Warren Buffett’s getting long oil, that has to be bullish, right? Hold up, there, wildcatter.

Despite the headline news of Berkshire Hathaway Inc. taking on another 17 million shares of Occidental Petroleum Corp., April 15 is not an auspicious day for the oil sector.

The same day, the International Energy Agency published a monthly oil market report that could easily sit on the horror shelves of any bookstore in Houston (if they were open): Roughly a decade’s worth of global demand growth is set to be wiped out this year. Moreover, while the pain is most acute this quarter, the IEA expects demand in December will still be 2.7 million barrels a day lower, year over year. In an ordinary oil market, that would be deemed a catastrophe; in today’s, it represents recovery. The IEA’s projections imply more than 1.5 billion barrels of oil flowing into storage this quarter, potentially maxing it out despite the much-ballyhooed Trump/OPEC+ deal. At that point, double-digit oil prices would represent recovery.

So don’t take Buffett’s apparent enthusiasm for bottom-fishing. Those new shares are just Oxy paying off a coupon on the $10 billion of preferred stock it issued to Berkshire last year with payment-in-kind rather than cash.

Let's recap. It just so happens that exactly a year ago, on an April 15 that may as well have been in a different century at this point, I wrote this about rumors that Oxy was poised to jump into a takeover battle with Chevron Corp. to buy Anadarko Petroleum Corp.:

It all comes down to one thing, though: Which currency would Anadarko investors prefer to end up with, Chevron’s stock or Occidental’s? Even though Chevron’s fell harder on news of an actual deal, Occidental’s sell-off on the mere rumor of an alternative looks more telling. In buying Anadarko, Occidental would be taking a bigger leap, and its new shareholders would be taking it, too.

“Leap” turned out to be something of an understatement; “bungee-jump with a set of shears” would have been closer to the mark. Yet it wasn’t Anadarko’s shareholders who took the plunge. In the end, they mostly got cash from Oxy’s winning bid. The critical slug of that cash came from Buffett, reducing the common stock component and thereby enabling Oxy’s management to consummate a “generational” deal (their words) without putting it to a vote of their own shareholders.

Oxy’s dividend cut, announced just over a month ago, meant the quarterly check to common shareholders was already only half the $200 million being wired to Omaha. But the exigencies of Covid-19 have now forced Oxy to resort to paying Buffett with more stock, and at a bombed-out price: This single payment dilutes existing shareholders by 2%. Despite this being mere mechanics in action, possibly Buffett thinks he is getting a bigger stake at bargain prices. But I think he originally took a preferred position for a reason.

Clearly, Oxy couldn’t foresee Covid-19 any better than the rest of us. Even a year ago, though, this looked like a leap for ordinary reasons. Most notably, Oxy was taking on a lot of debt at a time when oil investors were turning away from the wildcatter mentality and the market was facing a troublesome trade war. The resort to Buffett’s payday loan signaled this in spades and simultaneously shut investors out.

Looking ahead, even after the most acute phase of Covid-19 passes, the existing economic issues relating to trade friction will reassert themselves; President Donald Trump’s shocking withholding of funds from the World Health Organization amid a pandemic doesn’t suggest globalization will be making a comeback. And no patient as sick as the world economy is right now recovers that quickly, which was the main underlying narrative of the IEA’s report. Like the world’s storage tanks taking that gusher of excess barrels, or Oxy’s own shareholders last year, Buffett’s extra oil exposure isn’t a choice.