Buffett's businesses squeezed due to COVID-19

Warren Buffett has been waiting years for stocks to look more attractive. He apparently didn’t think the first-quarter plunge was that opportunity.

As the coronavirus slowdown started to grip the U.S., the famed investor’s Berkshire Hathaway Inc. was building its massive cash pile to a record US$137 billion by the end of March. The company said that figure climbed even higher as it dumped more than US$6 billion of stocks in April, making Buffett a net seller of equities so far this year.

Buffett, who will host Berkshire’s annual meeting virtually later Saturday, has largely stayed in the shadows as the pandemic hammered the global economy and stock markets. That’s a contrast to the financial crisis in 2008, when his Omaha-based company dipped into its vast cash reserves to gain lucrative preferred shares and rescue businesses teetering on the edge of collapse. While Berkshire’s operating earnings climbed in the first quarter, Buffett warned of pain from the virus’s fallout.

“As efforts to contain the spread of the COVID-19 pandemic accelerated in the second half of March and continued through April, most of our businesses were negatively affected, with the effects to date ranging from relatively minor to severe,” the company said in a regulatory filing Saturday.

The sharp drop in stocks sparked a debate over whether the slide was overblown, with some financial leaders highlighting buying opportunities and others predicting more pain to come. Those looking to Buffett for bullish signs would be left wanting. Berkshire reduced its stock buybacks even as its shares saw their biggest quarterly decline in more than a decade, while the US$6.1 billion of net equities sales in April far outstripped the US$1.8 billion of net purchases in the year’s first three months.

“Historically, he’s been pretty visible in the marketplace, encouraging investors to take advantage of market downturns and being greedy when others are fearful,” Jim Shanahan, an analyst at Edward Jones, said in a phone interview. “But if Buffett himself isn’t seeing opportunities, even in his own stock, what are we to think about the recent market selloff? Is it not a buying opportunity for long-term investors?” 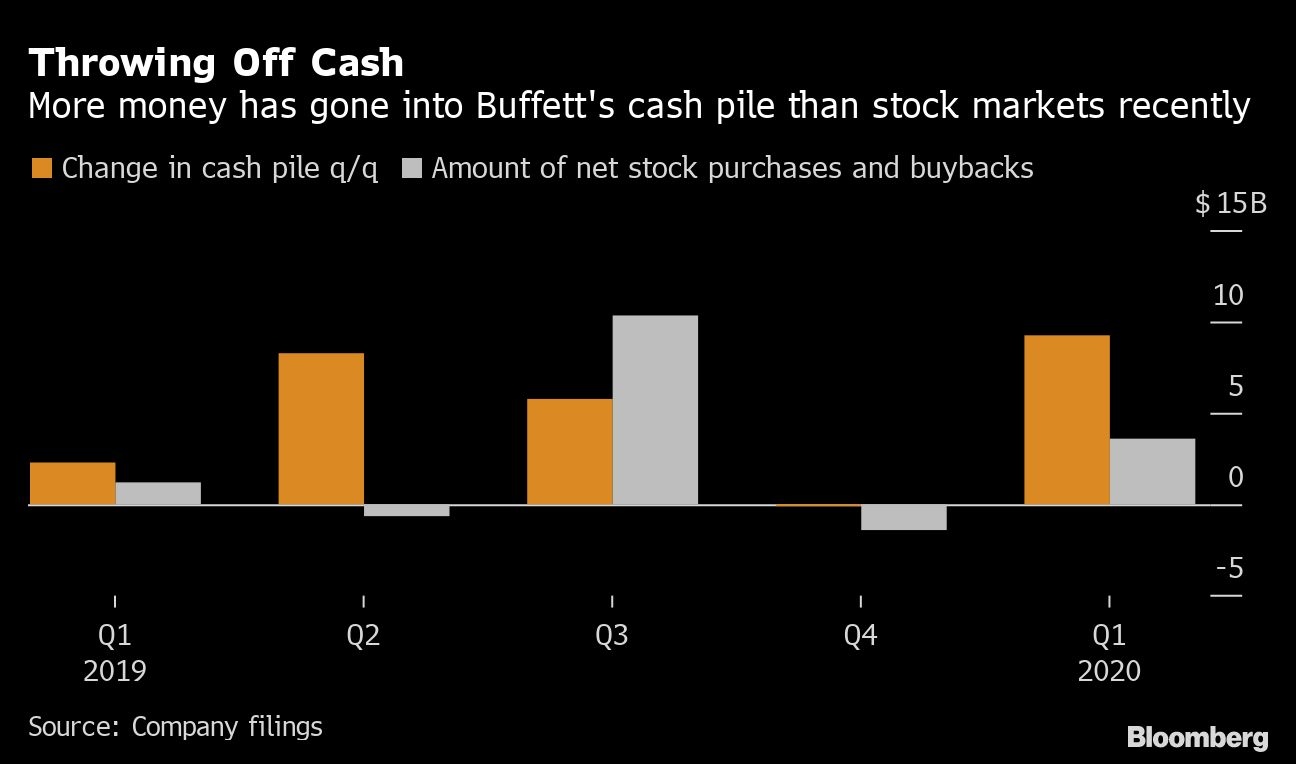 Berkshire’s Class A shares have dropped about 19 per cent this year through Friday’s close, worse than the 12-per-cent decline in the S&P 500 over the same time period.

Berkshire repurchased just US$1.7 billion of its own stock, less than it did in the last three months of 2019. The company recently disclosed that it pared back stakes in Delta Air Lines Inc. and Southwest Airlines Co. as airlines have been pummeled by travel restrictions and stay-at-home orders worldwide.

Buffett, Berkshire’s chairman and chief executive officer, has been on the hunt for higher-returning investments such as acquisitions or stock purchases for years, but has struggled amid what he called “sky-high” prices. That has prompted a range of questions about whether he can continue the market-beating run that turned Berkshire into one of the world’s most valuable companies.

The conglomerate’s first-quarter net income plunged to a loss of US$49.7 billion, driven by US$55.5 billion in unrealized losses in the huge stock portfolio. Gains in the insurance unit’s investing portfolio helped push operating earnings up almost six per cent to US$5.87 billion. 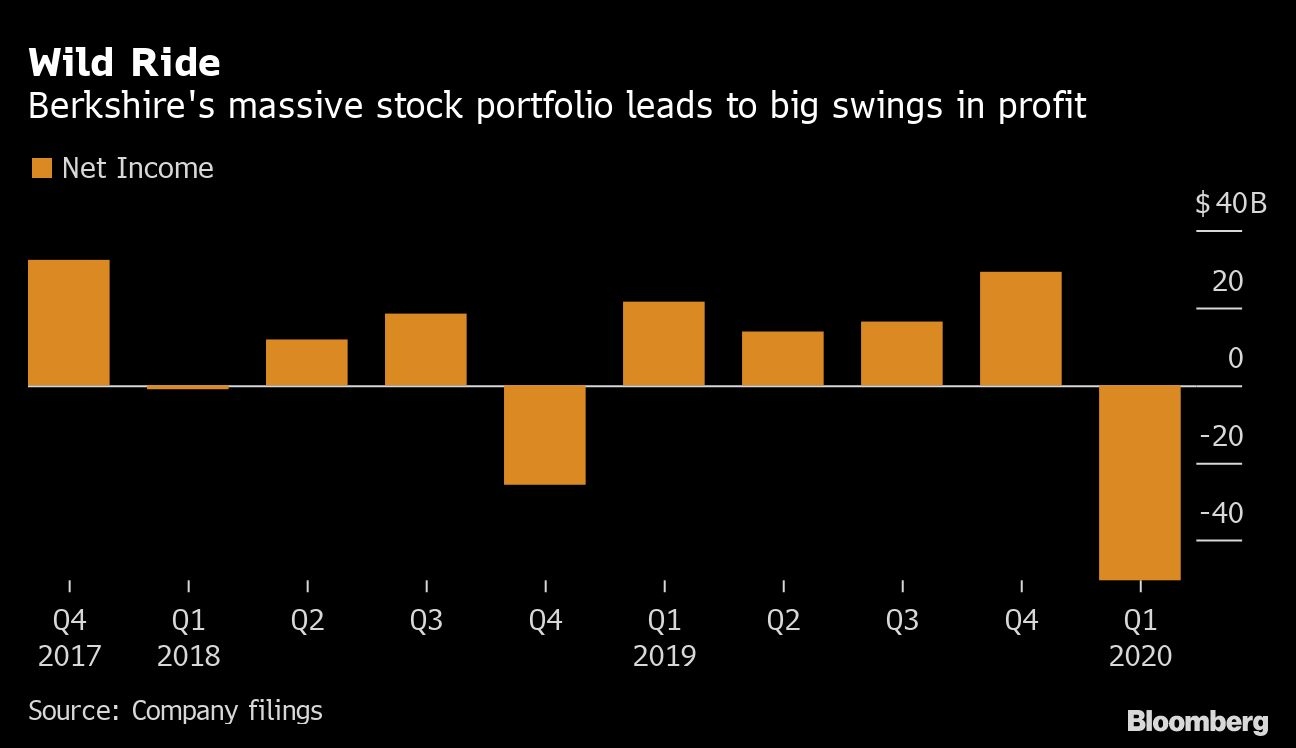 Berkshire started to see the COVID-19 pandemic affect units including its railroad, BNSF, which reported a 5.2-per-cent decrease in volume in the first quarter. Precision Castparts, which makes products for industrial and energy companies, reported lower sales across all of its major markets, partially because of the pandemic and Boeing Co.’s 737 Max issues. The company’s footwear and apparel businesses were also hit, reporting a 34-per-cent decline in earnings.

The company said its essential businesses that have remained open saw revenue slow “considerably” in April, while many of those that had to close are being “severely impacted.” Berkshire didn’t record any goodwill impairments in the quarter, but said it may have to write down the value of some of its businesses at its next review in the fourth quarter. Still, the company called its liquidity and capital “extremely strong.”

Buffett will host the annual meeting starting at 3:45 p.m. in Omaha with key deputy Greg Abel by his side. Buffett’s longtime business partner, Charlie Munger, won’t be in attendance. Follow the TopLive blog here.

Here are other details from Berkshire’s earnings report:

• Berkshire’s businesses have implemented business-continuity plans to help weather the crisis and are “preparing for reduced cash flows from reduced revenues and economic activity as a result of COVID-19.”

• Some operations have had to furlough employees, reduce wages and salaries, or cut back on capital spending to help mitigate the losses, Berkshire said in the report. See’s Candies, which Buffett bought in 1972, announced in early April that it would furlough retail workers and said more recently that it was testing reopening a few stores.