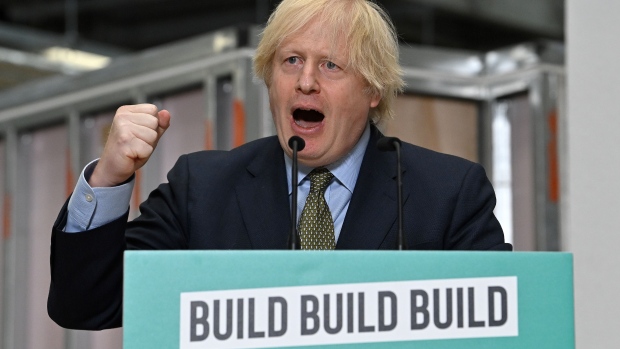 Boris Johnson set out his vision for dragging the British economy out of what may be its deepest recession in 300 years, with a program to spend billions of pounds on infrastructure to build back to prosperity.

In a speech on Tuesday, the prime minister confirmed his commitment to long-term investment in some of the country’s most deprived regions, arguing that balancing the books must wait until recovery is secure.

But his plan immediately ran into criticism, amid claims it offers no new money and falls short of the “Rooseveltian” program of rebuilding he promised the night before.

Reprising pledges he made before December’s election, Johnson announced the acceleration of investment in roads, schools and hospitals with a major overhaul of planning rules to speed up projects. His office said the allocations amounted to 5 billion pounds (US$6.2 billion).

“We cannot continue simply to be prisoners of this crisis,” Johnson said in the speech in Dudley, central England. “We must work fast because we have already seen the vertiginous drop in GDP and we know that people are worried about their jobs and their businesses.”

In December, Johnson won a commanding 80-seat parliamentary majority by promising to “level-up” deprived parts of the U.K. with spending on infrastructure and skills. But his plans were blown off course as ministers battled the pandemic, which has killed 43,575 people and plunged the economy into recession.

His speech, outlining what he called a “New Deal,” was aimed at regaining the political agenda and reviving his own vision for the country. Chancellor of the Exchequer Rishi Sunak will set out more details on the economic recovery plan on July 8.

Today @BorisJohnson set out his bold vision to create opportunity and get Britain building.

On July 8th I will deliver an economic update setting out the next stage in our plan to secure the recovery. pic.twitter.com/oQ3BEmxWbY

In his speech, Johnson:

‘Not Much of a Deal’

“There’s not much that’s new and it’s not much of a deal,” he told the BBC. “We’re facing an economic crisis, the biggest we’ve seen in a generation, and the recovery needs to match that.”

The government confirmed 12 billion pounds of spending to support as many as 180,000 new and “affordable” homes over the next eight years. The announcement appeared to suggest the program was being slowed down from a 12.2 billion-pound plan over five years announced in the budget -- though officials later clarified the cash will still be allocated over five years.

The 5 billion pounds Johnson allocated to hospital maintenance, school repairs and road improvements on Tuesday is not new money and is a fraction of the infrastructure spending announced in March.

“There was a lot of inevitable political bluster in Prime Minister Boris Johnson’s speech today, but for the economy there were two key takeaways. First, his pledge to accelerate 5 billion pounds worth of capital projects is money already allocated in the March Budget. He left plans for any further stimulus to Chancellor of the Exchequer Rishi Sunak’s update on the economy next week. Second, Johnson distanced himself from a quick return to austerity. That’s good news for the outlook.”

Carolyn Fairbairn, director general of the country’s biggest business lobby, the Confederation of British Industry, described the intervention as “first steps” only.

“Foundations are there to be built on,” Fairbairn said in a statement. “More is needed to prevent the uneven scarring unemployment leaves on communities.”

She called for more details on Johnson’s guarantee of apprenticeships and in-work placements for younger workers, as well as an extension of wage support to protect jobs and more funding for “future skills in high-potential areas such as digital, low carbon and health.”

Johnson described the planning reforms as the most “radical” since World War II. They include greater freedom for developers to change the use of buildings and land in town centers without planning permission, and would make it easier to convert unused commercial buildings into homes, his office said in a briefing.

The new flexible rules will not apply to pubs, libraries and village shops, but property owners will be able to extend their homes more easily.

Johnson has compared his approach to President Franklin Delano Roosevelt’s “New Deal,” which used government spending to help the U.S. out of the Great Depression in the 1930s. But he dropped a reference to Roosevelt included in overnight extracts from the text of his speech.

There was a reminder Monday that the U.K.’s path out of the crisis won’t necessarily be smooth when Leicester, a city in the English Midlands, reimposed recently eased lockdown restrictions and closed schools and non-essential shops after a spike in cases.

While much of that investment was designed to help reduce the U.K.’s long-standing regional inequalities in growth and productivity, there are questions over whether such spending is the best way to stimulate the economy’s recovery from coronavirus.

--With assistance from Thomas Penny and David Goodman.