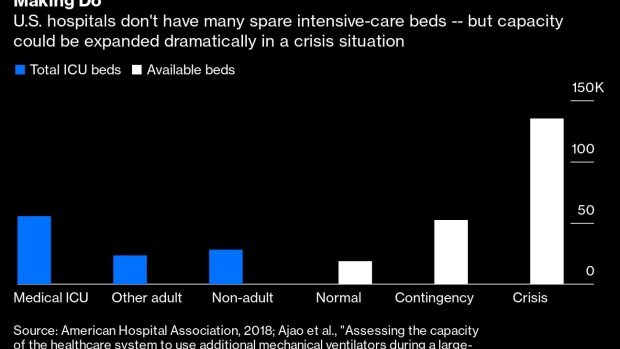 One is being built in New York City’s Central Park, and another with up to 4,000 beds is being laid out in London’s ExCeL exhibition center. Chicago’s McCormick Place convention center will house as many as 3,000 coronavirus patients; a further 2,900 non-coronavirus patients could be put in Manhattan’s Javits Center. Across the U.S., the Army Corps of Engineers has been assessing 114 different sites for building emergency hospitals.

These facilities will be crucial if countries want to avoid overwhelming critical care units amid the current wave of coronavirus cases. That's not the only advantage, though: If they’re kept in reserve for a sustained period and deployed alongside widespread testing, they could help shorten the amount of time we’re locked up at home over the coming months.

It's hard to think in the long term when thousands of people are dying every day, but right now we need to consider how the world will get through the next two years. Until either a vaccine is developed or the majority of the world’s population is infected and herd immunity starts to kick in, there’s likely to be repeated waves of infection. In previous crises, such as the 1918 influenza pandemic, subsequent waves were often more deadly than the initial outbreak.

The approach that's been adopted almost universally to cope with the coming surge of hospitalizations is to “flatten the curve” — closing schools and businesses, and banning public and social gatherings to minimize the contact between individuals and slow the viral spread. A lower, longer peak of infections could ideally keep the number of people needing hospital admission below the bed space available in critical care. That would avoid the grim situation in places such as Wuhan and Italy, where people died at home because there was no room for them in the wards.

An equally important benefit could come later, though. By raising the health system’s capacity to deal with a surge of severe infections, such facilities could also mean we stand a better chance of getting out of the house a little more over the next year or so.

A study released last week by researchers at the Harvard T.H. Chan School of Public Health shows how. (The paper hasn’t been peer-reviewed and published in a medical journal, so should be taken as suggestive evidence rather than gospel.) If U.S. critical care capacity is assumed to be around its current levels of 0.89 free beds per 10,000 adults, then officials could keep the epidemic within bed limits by locking down society with stringent Chinese-style distancing measures every time infections rose above 37.5 cases per 10,000 people, and opening things up again every time they fell below 10.

That would save lives, but at enormous economic cost. The measures would need to be in place between 25% and 70% of the time, giving little scope for the economy to emerge from its current funk until the middle of next year at the earliest. Doubling intensive care capacity, however, could knock months off the lockdown period, by making it easier for the healthcare system to cope with a surge of sick people and allowing infection rates to drift a little higher before we’re driven back into our homes.

While a doubling of intensive care beds sounds ambitious, it may be well within the bounds of the mobilization that’s currently underway. Open critical care capacity in the U.S. is typically equivalent to roughly a third of the country’s 80,000-odd adult critical beds, falling to about 10% to 20% of the total during a bad flu season. One 2015 study found that a typical spare capacity of about 18,900 spare beds could be expanded to 135,000 in a crisis, and to 52,400 in a less-severe emergency.

Finding staff and equipment to fit out the additional facilities is, if anything, the greater challenge — though even there, we're not entirely out of options. Hiring retired and student doctors, and making it easier for those currently in the workforce to practice outside their specialty or across state lines, would help expand the critical care workforce, as my colleague Max Nisen has written.

Even if ramping up production of ventilators and personal protective equipment takes time, some lower-tech solutions may work in a pinch. The U.K. is procuring CPAP machines like those commonly used by sleep apnea patients, for instance, after Italian doctors found they did the job of more costly ventilators in all but the most severe cases.

Almost every country has messed up its initial response to the coronavirus and is facing alarming shortages of hospital capacity as a result. The fact we’re insufficiently prepared now, though, doesn’t mean we can afford to ignore planning for how things will look in two, six or 12 months. The fight against this pandemic is a marathon, not a sprint.