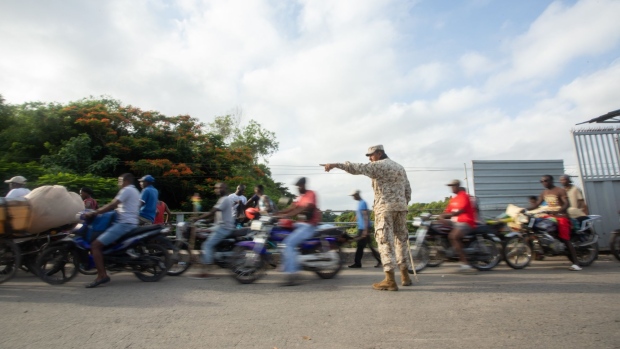 (Bloomberg) -- Santiago Riverón likes to project the image of rugged, frontier lawman. The mayor of a bustling little outpost along the Dominican Republic’s border with Haiti, he’s partial to white cowboy hats and blue jeans. On the wall of his office hangs a Winchester pump-action shotgun.

It’s mounted just above a flag of the Dominican Republic, and it symbolizes, he says, the same thing as the border wall that’s being built just miles down the road: “our sovereignty.” When finished, the wall, an imposing 13-foot-tall structure built out of concrete and steel, will stretch some 102 miles (164 kilometers), blanketing all but the most inhospitable parts of the frontier. Only one border wall in all of the Americas — the one separating the US from Mexico — is longer.

Riverón, a burly, graying man of 50, describes his town, Dajabón, as a flash point of the immigration debate that’s raging in societies across the globe — in Poland, Hungary, Chile, the US — after the pandemic sank hundreds of millions of people deeper into poverty in developing countries. Riverón knows that his tiny town wouldn't exist without the cross-border trade with Haiti and yet, in language that borrows from the playbook of Donald Trump and Viktor Orban, he says everything is spinning out of control now. Haitians fleeing the poorest country in the Americas — one beset by the world’s worst levels of food insecurity, an all-but failed government and land made infertile by climate change  — are, as he sees it, overwhelming local hospitals, strewing garbage on the street and depressing the wages earned by Dominicans.

“There are simply too many Haitians here,” he said on a recent afternoon. “I don’t want to use the word ‘invaded,’ but there are parts of this town that have been completely saturated.”

Back in the capital, Santo Domingo, government officials diplomatically describe the barrier as a painful necessity to insulate one of the region’s most successful economies from one of the hemisphere’s most intractable problems. Haiti has been rocked by widespread gang violence, kidnappings and political instability that has only grown worse since the 2021 murder of President Jovenel Moise.

The wall is also, at some level, a reproach to an international community that has spent billions in Haiti but has been unable or unwilling to alleviate the growing humanitarian crisis.

Haiti's violence has become “a low intensity civil war” that threatens the entire region, Dominican Republic President Luis Abinader said in a speech to the Organization of American States this month. “We are facing the real possibility that criminal gangs that operate in Haiti will try to threaten our territorial integrity, try to threaten citizen security in our country.”

The wall is highly controversial on both sides of the island of Hispaniola, where animosity and mistrust run deep. Some of the resentment is anchored in nationalistic grievances tied to Haiti’s 1822 invasion and 22-year occupation of its neighbor; along the border, memories still linger of the 1937 massacre that killed an estimated 9,000 to 20,000 Haitians on the orders of Dominican dictator Rafael Trujillo. Part of the acrimony is also rooted in racism and xenophobia directed at the first Black republic in the Western Hemisphere. Riverón himself peppers his speech with language — “they have their way of living and we have ours” — that betrays a nativist bent.

In recent weeks, the Dominican capital has seen marches demanding the ouster of Haitians, who protesters blame for crime and soaking up jobs, and newspapers have been choked with fear-filled editorials expressing sentiments very similar to those held by the US immigration hawks that backed Trump’s efforts to seal the US border with Mexico.

“We’re on the cusp of a migratory explosion that will have catastrophic and unimaginable consequences for the American continent, and most directly, for the Dominican Republic,” the Listin Diario, a prominent daily newspaper, wrote Aug. 24.

It’s unclear how many Haitians are in the Dominican Republic. A 2017 census found about half a million Haitians living there, although officials say the true tally could be twice as high. And Haitian workers — both with official papers and the undocumented — are the backbone of the Dominican Republic’s agriculture and construction sectors. In addition, tens of thousands of Haitians make day trips seeking work and supplies.

Abinader's top aides don't deny that there are long-standing racist currents in Dominican society pushing for a hardline stance. This can make it difficult, they say, to separate the ugly nativism from the legitimate need for an orderly border.

“There’s a profound racism in this society that has been cultivated since the time of Trujillo, and there’s a deep anti-Haitian sentiment that our own educational system perpetuates,” said Pável Isa Contreras, the country's economy minister. “It’s against Haitians, because they’re seen as Black and poor.”

Despite sharing the island of Hispaniola, the two nations often seem worlds apart.

The Spanish-speaking Dominican Republic saw its economy grow 12% last year and it’s forecast to grow 5% this year, one of the region’s fastest rates. Tourism is setting records, with a surge in arrivals from the US. Exports and foreign direct investment are near all-time highs.

On the other side of the border, Haiti is in free fall. The Creole-speaking country, which won its independence from France in 1804, has per-capita income one-fifth that of the Dominican Republic. It’s mired in political instability and in the grip of powerful, murderous gangs. Electricity and gasoline are often scarce. Nearly half of Haiti’s 11 million people regularly go hungry, according to the World Food Program.

Amid bloodshed and poverty, tens of thousands of Haitians are internally displaced and the number of people fleeing the country for the Dominican Republic and elsewhere has surged. Deportations in the first half of 2022 already surpassed the total for all of last year.

It’s in this context that the Dominican Republic recently awarded a $32 million contract to the Cofah Consortium to build the first 33 miles of the wall.

‘Not Just a Wall’

Contreras, the economy minister, says the wall is more than just a brute obstacle to keep Haitians out.

“This is not just a fence, it’s not just a wall. It’s part of a larger development package where the fence simply provides security,” he said in an interview. “Our border is terribly porous and very insecure, and we need to deal with that.”

The wall will reduce the illegal immigration, drug running, arms trafficking, cattle theft and contraband that plague both nations, he said. It will also channel migrants, goods and services through legal checkpoints. In addition, the government is earmarking money for a port, a tourism hub and trade projects along the border that Contreras says will generate jobs for both nations.

While dozens of border walls exist worldwide, they’re exceedingly rare in Latin America, a region that has relied on imposing natural barriers such as rivers, mountains or deserts to keep neighbors in check. Fences have been proposed for parts of the Ecuador-Peru frontier, and between Guatemala and Belize, but they’ve never fully materialized. The US-Mexico border wall's various sections total more than 700 miles, the longest in the hemisphere.

“Every wall in the world has been a failure -- from the Berlin wall to President Donald Trump’s wall” on the US-Mexico border, said Joseph Cherubin, the head of Mosctha, a non-profit that helps Haitian workers in the Dominican Republic. The Dominican wall “is a waste of money meant to satisfy a group of nationalists.”

He argues that only comprehensive economic development in Haiti will stop the tide of migrants.

Dayanna, a 25-year-old Haitian who asked to be identified only by her first name, said the wall won't keep her out. It doesn't matter how high or how long they build it, she said during a recent interview in Dajabón. Almost every day, she walks 40 minutes from her home in the town of Ouanaminthe into the Dominican Republic seeking work, sometimes as an assistant in a clothing store, to buy food for her 7-year-old daughter. She often slips border guards a couple of dollars to look the other way.

“As long as people are hungry, they will keep coming.”