SMITHS FALLS, ONT. — Innocuously tucked inside Canopy Growth Corp.’s cavernous, custom-built bottling facility is a series of four vats which may be the most important pieces of equipment the pot giant owns.

The series of stainless steel containers will each contain more than 300 litres of cannabis resin, the crucial ingredient at the centre of Canopy’s infused beverage plans which it hopes will usher in a new category of spirits and drive in millions of dollars in new revenue.

“Those will contain millions of dollars worth of cannabis soon,” said Mark Zekulin, chief executive officer of Canopy Growth, during a tour of the company’s bottling and chocolate facilities on Tuesday.

While Canopy employees work tirelessly to get the bottling plant ready for the company’s release of cannabis-infused beverages, the four vats remain empty and disconnected to a network of pipes that will take the gooey liquid and create one of more than a dozen of Canopy’s upcoming drinks. The facility isn’t fully licensed by Health Canada to manufacture cannabis products, meaning no pot can be anywhere inside the building, located right across the street from Canopy’s headquarters.

Undeterred, employees are doing their finals tests on the bottling line, inspecting the train of silver aluminum cans meandering through the various stages of production until they come out labelled and ready to be packaged for shipment across the country by mid-December.

For Canopy, however, the stakes are significant. The company needs the launch of these “Cannabis 2.0” products — drinks, edibles, vapes, and topicals — to be a hit and help the pot giant stay on track to be profitable in the next three years. 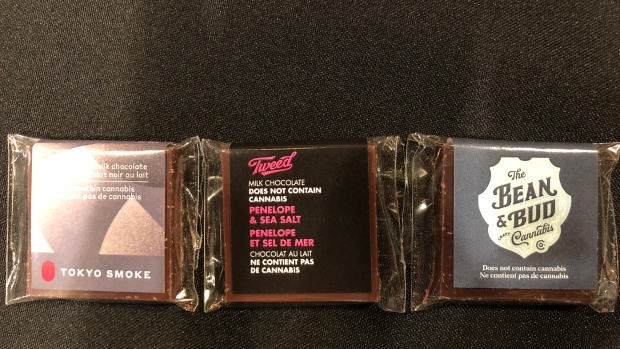 While the first year of legalized cannabis in Canada may have seen its notable stumbles, no other company has been under the microscope as much as Canopy. A rash of overspending and series of quarterly losses led Canopy’s board to dismiss co-CEO and founder Bruce Linton in July. Meanwhile, Canopy’s revenue in its recreational cannabis business declined in its fiscal first quarter to $61.1 million, from $68.9 million in the prior quarter.

Enter Houseplant, Deep Space, Quatreau and Tweed. The brands will represent Canopy’s initial foray into infused drinks, each with various levels of tetrahydrocannabinol and cannabidiol depending on the effect consumers wish to achieve. Pricing information wasn’t released due to competitive reasons, company officials said.

“These products are built for success,” said Paul Weaver, Canopy’s head of innovation during a media roundtable and tasting for its drinks and chocolate products.

The company spent more than two years developing the right way to create the clear cannabis “syrup” that needs to be added to a drink that would let consumers feel stoned without experiencing the familiar taste of cannabis. Constellation Brands, Canopy’s main investor, assisted with the construction and design of the company’s bottling facility as well as aiding with product branding, Zekulin said.

“The next generation of products we’re talking about doesn’t exist at all in the Canadian market,” Zekulin said. “What we’re seeing here is our effort to take our existing products, pay homage to the fact that they’re unique cannabis varieties and capture those flavours in a new [ready-to-drink] product.”

Canopy plans to have more than 50 new products including infused drinks, edibles and vapes available in Canada next year over a staggered rollout which will see gummies out in April and additional drinks out in the summer, Weaver said.

Owen Bennett, an analyst with Jefferies LLC said Canopy’s product rollout is “encouraging” but still maintains reservations on how big the cannabis drink market can be.

“While we believe Canopy will lead the way in beverages, our caution is around how material a contribution it will be, with reservations around the size of the segment,” Bennett said in a note to clients on Wednesday. He estimates cannabis-infused drinks will account for 10 per cent of the total cannabis market by the end of 2020, with Canopy accounting for a 40 per cent market share in that category.

“Given this bullishness, and given the spend Canopy has put in place around beverage infrastructure, if segment growth is somewhat subdued it is likely to weigh on sentiment,” Bennett added.

If a drink, such as the 10 milligrams THC-infused Deep Space beverage that some reporters said tastes like Jolt Cola, isn’t palatable for consumers’ tastes, Zekulin said the company can change course quickly.

“It’s all new for us,” he said during the bottling tour. “We’ll see which [drinks] will be a success for us and which won’t.”