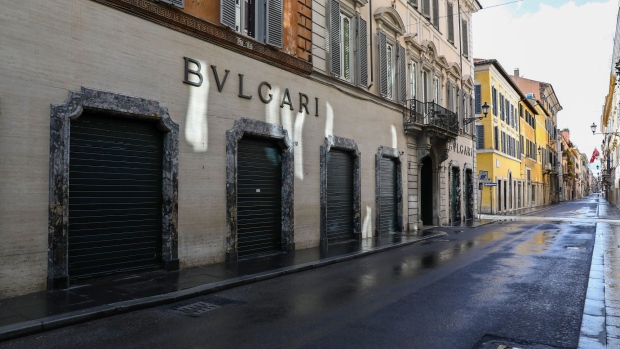 (Bloomberg) -- Bulgari Chief Executive Officer Jean-Christophe Babin said he expects the LVMH-owned jeweler to recover most of the sales it lost due to the Covid-19 pandemic over a period of two years.

“I’m confident that over a period of 24 months, we will have recovered most of what was lost during Covid,” he said in a Bloomberg TV interview. “In our business, it’s never lost, it’s more postponed.”

The CEO also said he’s sticking to a plan to expand a line of luxury hotels despite the coronavirus outbreak. Within the next two to three months, the brand will announce plans for further hotels, including an entry into the U.S. market, he said.

The pandemic “doesn’t change our strategy an inch,” he said.

The Roman brand -- synonymous with some of the extravagant pieces Elizabeth Taylor wore on the set of Cleopatra -- was bought in 2011 by LVMH, in what was then its biggest acquisition. Billionaire owner Bernard Arnault is now following that up with LVMH’s $16 billion bid for Tiffany & Co., set to close this year.

LVMH’s revenue from watches and jewelry suffered a 26% drop in the first quarter, the steepest slump for any of its product categories. The decline reflects the segment’s reliance on physical boutiques that sell products like $2,300 Colosseum-inspired B.Zero1 rings and $18,200 snake-like Serpenti Tubogas watches.

“It does help, but certainly doesn’t offset the closure of our stores,” he said.

The consumer demand recovery has been “beyond belief” in countries like China and South Korea after 10 weeks of shutdowns.

Bulgari is also noticing “positive” signs of recovery in Germany. “They are compensating since April what they couldn’t buy in the first quarter,” Babin said, adding that jewelry is less exposed to seasonality than fashion.

Shares in LVMH fell as much as 1% in Paris. They have dropped 4% this year.

After reopening a property in Rome, Bulgari has four locations under construction, which will bring its roster up to 10.

The brand is expanding despite dire forecasts for luxury travel this year. McKinsey recently predicted demand for hotel stays in the U.S. may only return to pre-pandemic levels in 2023, while the luxury segment will have the slowest recovery.

Bulgari plans to add a second Italian hotel in Rome in 2022, having secured a property nearby its flagship store on via Condotti. The brand is set to open a hotel in Paris next year, a stone’s throw from the headquarter of its parent company. Bulgari also plans openings in Moscow and Tokyo in 2022 and 2023, respectively.