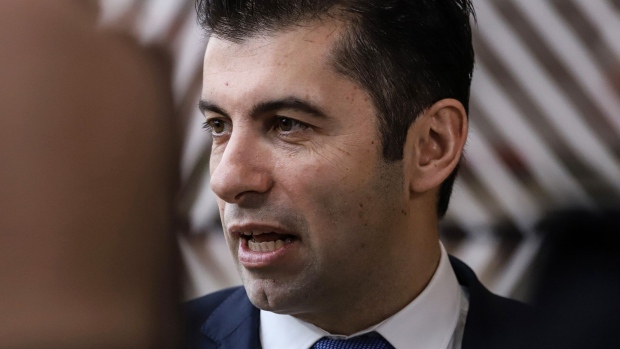 Kiril Petkov, Bulgaria's prime minister, speaks to members of the media at a European Union leaders summit to discuss security and defense at the European Union (EU) Council headquarters in Brussels, Belgium, on Friday, March 25, 2022. The U.S. and the European Union will push to boost supplies of liquefied natural gas to European countries by the end of 2022 in a bid to displace Russian gas, a political framework that now leaves companies to sort out the details. , Bloomberg

(Bloomberg) -- Bulgaria descended deeper into political crisis as Prime Minister Kiril Petkov’s government lost a vote of no-confidence in parliament, raising the prospect of a fourth general election within only two years.

Petkov, who sought to tackle graft and curb Russian influence since taking office last year, will have to resign after a former junior partner in his fragile coalition joined opposition lawmakers to vote him down on Wednesday. Some 123 lawmakers in the 240-member assembly voted against the government; 116 were in favor.

“We promise that we’ll continue our battle to win our country back,” Petkov told lawmakers in Sofia after the vote, calling the ballot a “small step.”

Party leaders will now have a chance to form a new government, with Petkov given the first attempt. If three attempts fail, President Rumen Radev will have to appoint an interim cabinet and schedule a snap election.

Petkov’s government was ousted as it tried to break a deadlock in European Union enlargement talks with Balkan nations, which led a junior coalition member to quit partly because it opposed efforts to aid neighboring North Macedonia’s entry bid to the bloc.

Bulgaria also became one of the first countries to have its gas from Russia cut as Petkov sought to diversify supplies away from the world’s largest energy exporter amid the war in Ukraine.

The government’s fall will delay the EU’s enlargement plans in the Balkans and may hinder Bulgaria, perceived as the bloc’s most corrupt member, from adopting the euro in early 2024. It likewise risks delaying the transfer of as much as 6.3 billion euros ($6.6 billion) in EU funding under the bloc’s plan to help countries recover from the Covid crisis.

An early national vote may add support for pro-Russian forces in a country with traditionally strong ties to Russia. Polls show it could double the backing for anti-EU nationalists that are currently in parliament, and a new conservative party, led by Petkov’s former defense minister, may also make it into parliament.