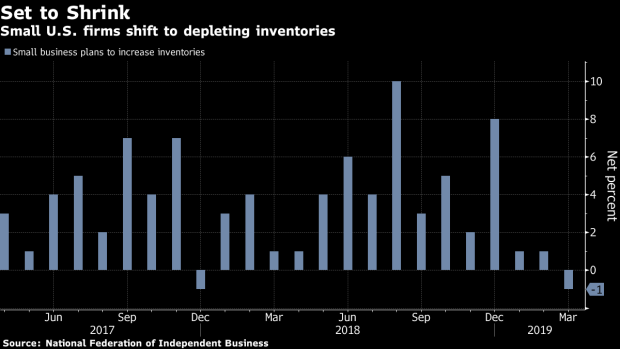 An employee moves an order of walls on a forklift in Baltimore, Maryland. Photographer: Andrew Harrer/Bloomberg , Bloomberg

(Bloomberg) -- The rising stockpiles of cars, furniture and other goods that helped the U.S. economy boom in 2018 are now poised to cause a hangover this year.

Inventory accumulation added an average 1.2 percentage point to U.S. growth in the third and fourth quarters, government figures show, and were a key to the year’s 3 percent expansion, the fastest since 2005 and President Donald Trump’s annual goal. Reversing that buildup will trim growth in 2019, likely starting in the second quarter and continuing through the rest of the year, according to a Bloomberg News survey of 20 economists last week.

One overhang is the auto market, where the six-month average of dealer stocks of cars and trucks matches the highest since 2009 at 75 days. Manufacturers and sellers of furniture and clothing share the same problem, as do small businesses. The inventory swing is likely to exacerbate the U.S. slowdown, with the economy already facing headwinds from the waning impact of tax cuts, slowing global growth and continuing trade tensions.

“This puts the U.S. economy on a little bit thinner ice and less able to withstand any unexpected shock,” said Diane Swonk, chief economist at accounting firm Grant Thornton LLP in Chicago. “This is one more reason it makes sense for the Federal Reserve to hedge its risks by staying on the sidelines.”

In March, more small-business owners planned to reduce rather than increase inventories in for the first time since December 2017, according to the National Federation of Independent Business’s monthly survey released last week. Yet firms said they were continuing to build up stockpiles for the ninth straight month.

There are two major causes of the inventory overhang. First, manufacturers and retailers bought imported goods in bulk last year in anticipation of tariffs or other barriers, especially from China, with whom Trump’s trade advisers are trying to negotiate a deal. Second, sales have been disappointing for retailers, with declines reported in two of the past three months.

“Firms spent the back half of 2018 trying to get ahead of trade disputes,” said Richard Moody, chief economist at Regions Financial Corp. That led U.S. firms “to step up imports of goods, whether consumer goods or capital goods, and store them in inventory.’’

Exactly how this plays out is uncertain. While trackers such as the Atlanta Fed’s GDPNow estimate that inventories made a positive contribution to first-quarter growth, some economists say the drawdown may have begun then.

A mini-inventory cycle is clouding a proper accounting of the underlying health of the economy -- and creating a false sense of weakness at present. To be sure, an inventory correction in the near term will clobber GDP growth -- in addition to weighing on factory sector output and hiring. However, as a result, forecasters may be under-estimating the likely growth trajectory of the economy in the second half of the year -- thereby setting up for a significant reconfiguration of expectations once the overhang has been ameliorated. --Carl Riccadonna, chief U.S. economistClick here for Bloomberg Economics’s full report on the inventory impact.

In the Bloomberg survey, economists expected a median reduction to growth of 0.2 percentage point in the second quarter and 0.1 percentage point in each of the following two periods. But there’s a wide range of views of when the drags will happen and how large they will be, with some expecting more than 0.5 percentage point of reductions in coming quarters.

“Business inventories is the most difficult component in GDP to predict,” said Russell Price, a senior economist with Ameriprise Financial Inc. who projected a drag on first-quarter growth.

A Federal Reserve report Tuesday showed factory output fell at a 1.1 percent annual rate in the first quarter, the worst performance since late 2017, a further signal of manufacturing softness as producers cope with an inventory buildup.

Ford Motor Co. noted in a conference call this month that truck inventories amounted to 70 days, up from 66 a year earlier, though Mark LaNeve, vice president for U.S. marketing, said that’s not a serious imbalance. “You will almost never hear Ford dealers have too much truck inventory,” he said.

Overall, “most of the buildup now is slowing demand” with declining new-vehicle sales for the industry this year, said David Whiston, a Morningstar Inc. autos analyst.

Other companies have expressed concern. Luggage maker Samsonite International SA aims to cut inventories to a range of 120 to 125 days from 138 days, officials said on a recent conference call. “We’re very focused on that across all of our regions,” Chief Executive Officer Kyle Gendreau said.

Constellation Brands Inc., the owner of Corona and Modelo beer in the U.S., said distributor inventories were recently higher than expected partly because of poor weather, especially on the West Coast. And electronics maker Jabil Inc. has said it built up stockpiles in anticipation of expanded sales and expects inventory levels to moderate.

“Businesses need to slow the gains in inventory adjustment in line with sales,” said Ben Herzon, an economist with IHS Markit’s Macroeconomic Advisers unit. “That business behavior is not going to be adding to growth going forward.”

To contact the reporters on this story: Steve Matthews in Atlanta at smatthews@bloomberg.net;Catarina Saraiva in Washington at asaraiva5@bloomberg.net

To contact the editors responsible for this story: Brendan Murray at brmurray@bloomberg.net, Scott Lanman, Jeff Kearns