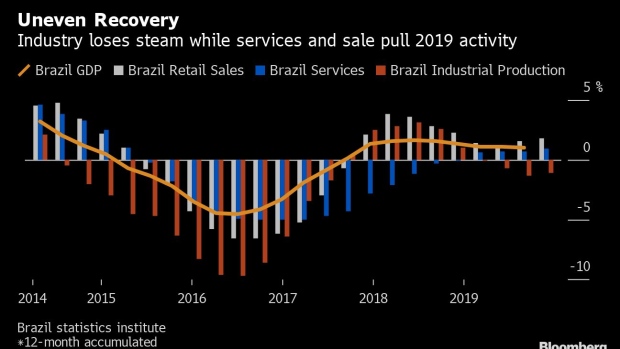 The economy expanded by just 0.89% in 2019 following a contraction of 0.27% in December, according to the central bank’s activity index, which is a proxy for gross domestic product. While the weak full-year figure reported Friday comes as no surprise, signs that activity didn’t keep pace with already muted expectations at the end of 2019 may impact estimates for this year which some analysts have already started to trim.

Since assuming power over a year ago, President Jair Bolsonaro’s administration has pulled out all the stops in efforts to jump-start growth. Policy makers have cut the benchmark interest rate to a record low amid tame inflation, embarked on unprecedented sales of state-controlled assets and enacted a long-awaited pension reform. That’s set the stage for GDP growth to rise to 2.3% this year, according the latest central bank survey of economists.

Read More: Third Time May Be a Charm For Brazil’s Upbeat Growth Forecasts

Amid such optimism, many analysts were taken aback by retail and industrial production figures that missed estimates in both November and December. Drops in closely-watched categories such as food and beverage sales and capital goods production laid bare barriers including shaky confidence, high unemployment and rising family indebtedness.

“The contraction in industrial output and retail sales at the margin do suggest a weak economic activity in December. It is too soon to decree that monetary policy is not working, but it is important to acknowledge that most of the monetary easing effect will come through an increase in demand.”

New headwinds coming from half a world away are exacerbating growth concerns. An outbreak of coronavirus is rattling China, which is Brazil’s top trading partner and a key buyer of goods including soy, cellulose and iron ore. This week, Brazil’s central bank warned that the virus may hit commodity prices and important financial assets.

Brazil central bank President Roberto Campos Neto has said the pace of recovery tends to be slower at first, given that growth is now being driven by the private sector following years of loose public spending. In an interview late Wednesday with GloboNews, he reiterated that this year’s GDP expansion will be around 2%.

To be sure, there are some signs that the economy is gaining traction. Outstanding loans recently posted their largest monthly jump in five years and government officials expect job creation to accelerate further.

Brazil’s services sector has consistently outperformed others such as industry. For Paulo Gala, economist at Fator Asset Management, such disparities point to an uneven and slow recovery.

“Industry is creating very few jobs, and as a whole, a lot of the positions being created are in services with low productivity and technology,” said Gala, who is also a professor at Fundacao Getulio Vargas, a business school. “Many of the government’s proposed reforms don’t tackle this situation. We are not overcoming the slump in productivity with ‘high-tech bakeries.’”

--With assistance from Rafael Mendes.